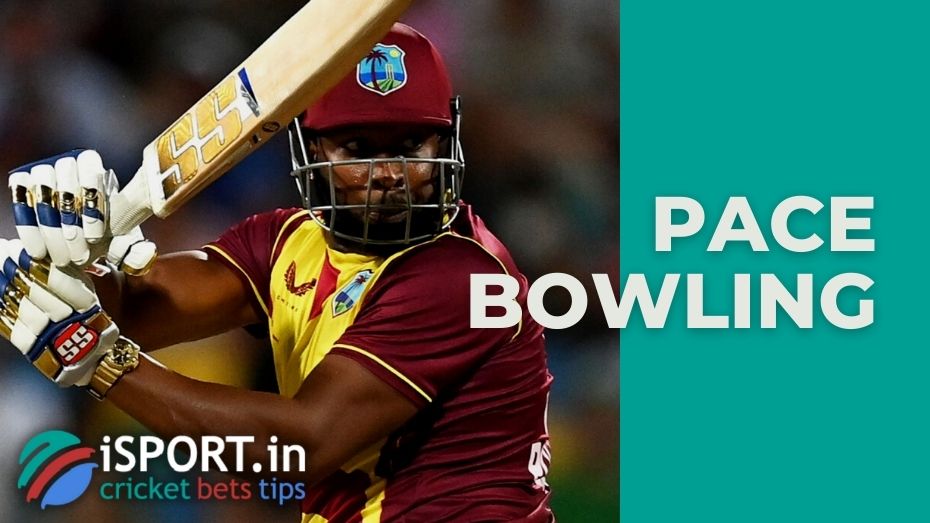 Pace bowling is one of the two main approaches to batting in cricket, which focuses on speed. Representatives of this direction are usually called fast bowlers or swing bowlers/seam bowlers. Strictly speaking, a bowler of this type does not have to have a record speed of serving, but these days players who prefer a more moderate pace are rare, especially at the level of test competitions.

The essence of Pace bowling is to perform the pitch in such a way as to force the player with the bat to make a mistake. As a rule, the bowler achieves this goal by forcing the projectile to deviate from a predictable trajectory, which in turn forces the batsman to go for a compensating maneuver. It is worth clarifying that the bowler’s task is simplified by the very design of the cricket ball: thanks to the protruding seams, the direction of its rebound is not easy to predict.

This nuance is also used by pure Pace bowlers, who train to serve the ball, taking into account weather conditions, the location of the seams on the ball, the tilt of the body and many other factors, as well as experiment with speed. Thus, the best of the best skillfully combine the power of impact with the ability to set the ball in an unpredictable flight path.

As a rule, fast bowlers are divided into categories either on a quantitative or qualitative basis. The most common method is based on the assessment of the delivery rate, although ideally, the level of competition, the characteristics of individual equipment and the gender of the player should also be taken into account. For example, you can often find clarifying terms “fast medium”, “medium”, “slow medium”, “fast” and “express”. In addition, fast bowlers are often divided into Swing and Seam: the difference between them is the speed of delivery and the method of landing the ball (for example, bowlers of the second category try to serve the projectile so that it lands on the seam, changing the angle of rebound, and the first – they bet on changing the trajectory of the ball right in the air).

Anyway, it is the fast bowlers who are the core of the team and the main tip of the attack in the vast majority of cases. The exceptions are the Indian subcontinent, Bangladesh and Sri Lanka, where fast bowlers act as spinners’ assistants due to the peculiarities of the climate and the physical characteristics of local grounds.

The first thing you need to learn to perform Pace bowling successfully is the correct grip of the ball with a vertical alignment of the fingers along the seam. The index and middle finger are located at the top, the thumb at the bottom, the ring finger and the pinkie are pressed against the palm, the ball is directed forward. Such a grip allows not only to avoid involuntary slipping of the projectile, but also to calculate the delivery trajectory more accurately. As a rule, the bowler keeps his free hand over the working one until the last moment so as not to give the batsman a chance to guess his intentions.

Another important detail of Pace bowling is the run-up. Fast bowlers need more space than spinners, so they first measure the steps and mark the distance to the wicket. If the attacking player makes a spade, No ball is declared, which actually nullifies his efforts in a particular episode.

The bowler completes the run-up with an emphasis on the leading leg, straightening the knee as much as possible. On the one hand, it helps to gain the necessary speed; on the other hand, it carries a potential risk of injury (for example, English Pace bowler David Lawrence was out of the game for a long time after his kneecap literally split in half due to too much emphasis). Some fast bowlers even cut off the socks of sports shoes because the fingers that strongly rest on the inside of the boot when running can easily be broken.

Having taken the emphasis, the bowler throws his hand with the ball over his head, sending the projectile to the point of the pitch that seems optimal to him in a particular game episode. It is worth clarifying that cricket Laws determine this hand position at the start of the attack: by bending the elbow, the bowler gets an advantage over the batsman, which puts them in obviously unequal conditions.

Another criterion by which fast bowlers are often divided is the body’s position at the time of acceleration of the attack. Chest-on bowlers turn their chest and hips towards the batsman, while Side-on bowlers maintain an angle of 90 degrees (a striking example of a bowler of the second type is the Australian Dennis Lillee).

There are several types of ball delivery by fast bowlers. Sling (Javelin) deserves special mention, in which the bowler starts the serve with his hand completely wound behind his back, which gives the ball additional speed. Performing this type of serve requires a high level of coordination and control, as well as physical strength (Sling was perfectly mastered by Australian Jeff Thomson, Sri Lankan representative Lasit Malinga and Pakistani Shoaib Akhtar).

At the end of the pitch, the bowler takes a few more actions: makes a turn to the side so as not to step on the pitch, and then takes a few steps, slowing down. Fast bowlers, accelerating, often literally “plow” their area, and spin bowlers often use these irregularities to give the ball additional speed. The ability to slow down is a separate art because bowlers who have received three warnings for entering the pitch can be punished by deprivation of the right to serve.

Two key criteria that guide the representatives of Pace bowling are length and line. The line is the horizontal trajectory from Off side to Leg side, and the length is the distance separating the bowler and the batsman (that is, the distance that the ball must cover). The more accurate a fast bowler is the higher his performance (for example, Australian Glenn McGrath and South African Shaun Pollock).

Another specific term that is associated with Pace bowling is the so-called uncertainty corridor or the area behind the Off stump of the batsman. Serving in this sector is traditionally considered one of the most difficult for a batsman since even the best of them can not accurately determine whether the ball will reach the wicket.

There are several types of length in Pace bowling, namely:

By Good length is meant a pitch with a bounce approximately at the level of the batsman’s hip. Interestingly, it is not possible to deduce the arithmetic mean applicable to Good length since it is necessary to take into account the distance between the fast bowler and the batsman, the state of the court, the growth of both players and a number of other factors. However, it is a Good length that is considered one of the most difficult for a batsman since he must decide how to receive the ball and where to hit it in just a few moments.

Short pitched is more convenient to receive, so fast bowlers rarely use it. First of all, it is useless against attacking batsmen who are able to switch from defense to attack in a matter of seconds. Full pitched is also not among the non-scoring ones since it is more convenient for batsmen to start so-called drives at this length.

One of the most difficult, not without reason, is considered to be the Yorker – a serve with a rebound in the legs. This kind of blow is difficult to take; in addition, it literally pushes the batsman back, which increases the risk of removal. It is significant that a Pace bowler should ideally be equally good at all types of strikes, unlike spin bowlers, who, as a rule, prefer Good length.

The best fast bowlers in the world include:

This is interesting: Pace bowling is at the same time not only the most effective, but also the most harmful kind of pitching. Speed bowlers are forced to rest their feet as much as possible on the ground while bending at the lower back, which leads to back problems.