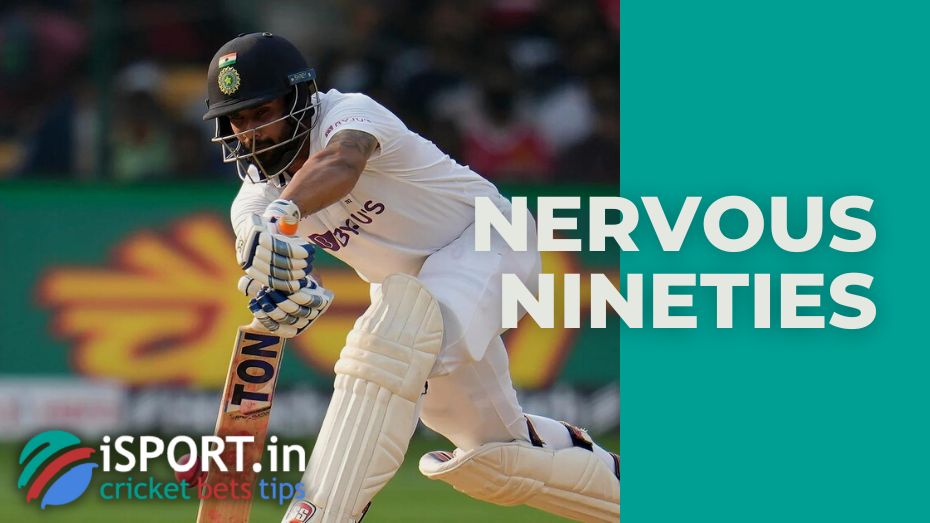 Several significant achievements in cricket greatly influence the status of a professional player. In this article, we will break down the term nervous nineties. It refers directly to the batsman and denotes the state where the batsman has scored 90 runs and tries to take century. This article will present some moments when the players were on the verge of great achievement.

Nervous nineties – a difficult period for the batsman

Every professional player needs to achieve certain results during their cricket career. To make his name go down in the history of this unique sport. Let’s say it is important for bowlers to take as many knocked-out wickets as possible (applies in one match and for the entire career).

For batsmen, there is such a thing as century. It represents the number of runs scored in one match. This is one of the most important achievements for every professional player. Due to the specific sports fields, such records were rare until the end of the 19th century. However, now the century is earning much more often.

The term nervous nineties directly refers to the taking of the cherished century. Surely every person has experienced such a state when he is about to succeed in doing something difficult (close on the way to his goal). This can manifest itself in an excessive release of adrenaline, in the appearance of anxiety, stress. All this can lead to stupor, to the loss of your goal.

In cricket, nervous nineties mean when the batsman has 90 runs and realizes that he is very close to century. This is a very serious period because getting the other ten runs will be much more difficult than all the previous ones (psychologically). When a batsman gets 90 runs, he becomes closed, and his risky actions are reduced to zero. By far, if a batsman is knocked out on runs 99, he is considered the most unlucky of all who tried to score a century with nervous nineties.

In turn, if the opposing captain knows that the batsman has a chance to take 100 runs, he changes tactics and places the outfield players closer to the pitch, thereby creating additional pressure for the batsman (because the players are nearby, there is no point in playing into defensive cricket, and he has to take risks to get his wounds).

According to statistics, Australian Michael Slater is one of the most unlucky players to fall under the influence of nervous nineties. In his entire career in test matches from 23 attempts, he did not reach nine times until century! West Indies cricketer Alvin Kallicharran reported similar results (or anti-results). Out of 19 attempts, he was unable to take century 7 times. The most famous player who was fired 27 times in all three international formats (on the way to 100 wounds) is the Indian batsman Sachin Tendulkar. However, this is a unique and completely outstanding cricketer (he has some other unique achievements on his account).

The term nervous nineties can also be applied to batsmen who have stopped short of 200 or 300 runs. Probably one of the most embarrassing layoffs happened in 1991 with New Zealand batsman Martin Crowe. He was knocked out on the 299th run. Another unpleasant incident happened to the Englishman Alexander Hales. In 2012, at one of the T20I matches, the batsman was fired for 99 points. Today Alexander is considered to be the only player with such a disappointing loss. However, this does not prevent the Englishman from being one of the best Twenty20 batsmen in the world. He is also the first player to take a century in the T20I.

Either way, not dealing with nervous nineties is a great experience for the batsman. If he got to such runs, then he will surely take the cherished century.