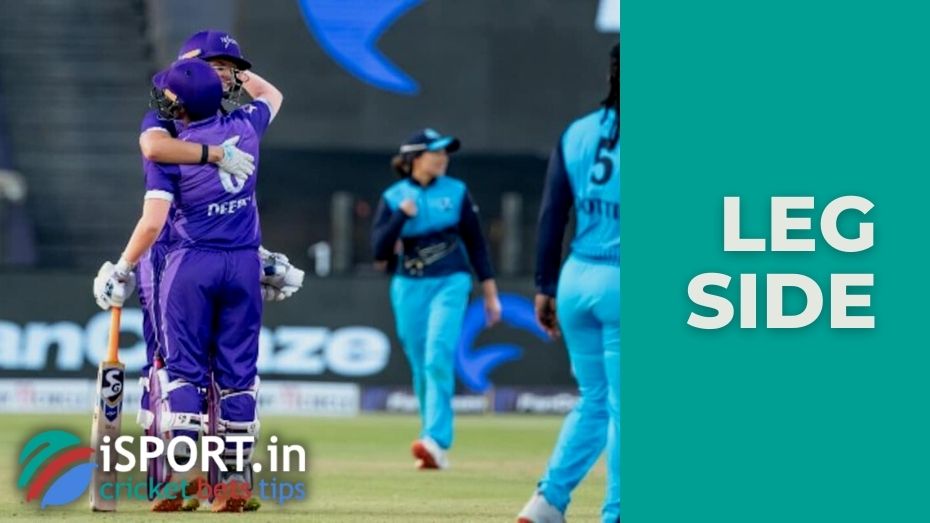 Leg side (on side) is the definition of the side of the cricket field corresponding to the non-dominant (opposite) hand of the batsman from the point of view of his perspective.

In theory: a cricket field is divided into two halves by an imaginary line running down its long axis. In a classic batting stance, the striking player stands with a side that is convenient for hitting the bowler (sideways). Based on this, the leg side is the half of the field behind the batsman. The half of the field in front of him is called off side.

Thus, the determination of the side is the exclusive prerogative of the batsman. If he is facing the bowler, then leg side:

As a rule, the leg side is less protected by fielders than the on side. An inconvenient side for batting reduces the chances of catching the ball by the players of the cover, mid on and long on positions. However, this does not exclude the mistakes of a batsman who is able to send the ball even for himself.

The terms leg side and on side today apply to the entire half of the field. However, they can be used separately for each half of the field – it’s all about the reference point. When the ball is played on the half in front of the wicket, it is usually said that the ball was played on the side, but when the ball is played behind the wicket, it is considered that it is leg side.

In addition, the names of field positions often include the extra concepts “leg” and “on”, partially reflecting them. So, for example, the fine leg (on (leg) side) position, although located behind the wicket, corresponds to the direction of the strike (stand) of a right-handed batsman. Interestingly, the batsman’s movement from his usual position towards the bowler is also considered a leg side movement.

You can find parallels regarding the leg side in cricket and baseball. Since the leg side characterizes the area of the field “behind the batsman”, it corresponds to the left half of the baseball arena, taking into account third base.