Howzat or How’s that? 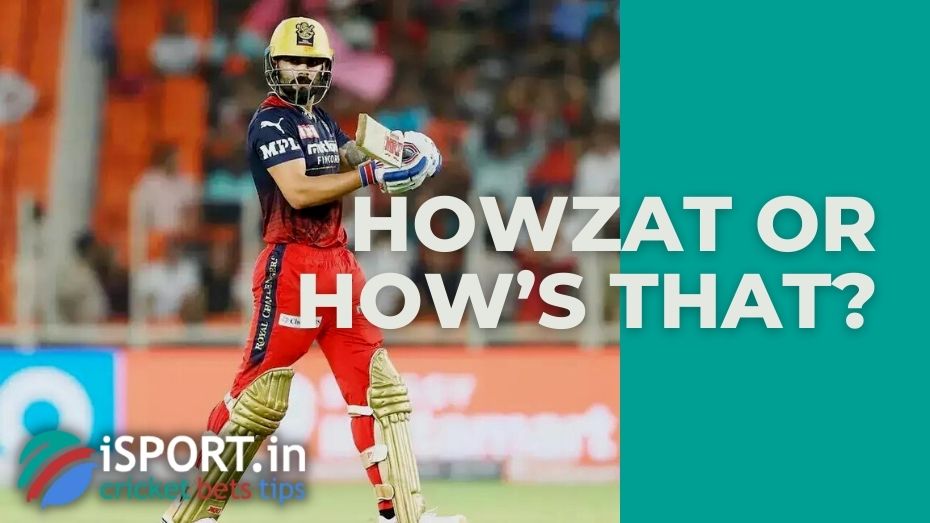 That is why fielders are obliged to report even obvious episodes: there were a number of cases when the batsman was technically out of the game, but in the absence of an appeal, an out was not declared. According to the regulations, the Howzat or “How’s that” rule can be activated at any time until the next inning.

According to the basic rules of cricket, an appeal is an oral request, which should sound like “How’s that?” However, in the heat of the game, cricketers often “swallow” syllables so that a short phrase can turn into Howzat, How, and Zat. It happens that players attract the referee’s attention with a normal shout or gestures, raising their hands.

It is worth noting that, although technically the appeal should attract the attention of the referee, whose task is to evaluate the episode as accurately and correctly as possible, batsmen often leave the field without waiting for his verdict. As a rule, this happens in cases where the alignment is obvious. Still, according to the rules, the batsman has the right to stay on the court until the last and challenge the appeal, especially if he is sure that the situation can be resolved in his favor.

A characteristic episode was described in one of his interviews by the Australian batsman Steven Smith. In a test match against Pakistan (2016), he was a step away from his 16th hundred in his career but almost missed the chance to make it, because he was out. To the surprise of the Australian, the Pakistanis did not notice this and did not appeal, so he continued the game, making a hundred:

“I was amazed. I was at the 97 mark, the episode was obvious, but no one came up, so I decided to stay. I didn’t turn around. I don’t know why. I just focused on the ball, although, of course, it’s all a little strange.”

The fact is that some game moments (for example, a spade, that is, “leg before wicket“) require an unambiguous intervention of the referee with a subsequent assessment of all factors. The exception is an unambiguous out, which does not happen as often as it may seem. It is important to keep in mind that Howzat or “How’s that?” has nothing to do with the practice of deliberate provocation, the purpose of which is to infuriate the enemy by forcing him to make a mistake. In fact, it is the prerogative of the fielders, which adds entertainment to the match, so any abuse is considered a direct violation of the ICC Cricket Code of Conduct.

So, in particular, it is considered unsportsmanlike:

Such behavior on the part of field players can be punished with additional free kicks, penalties or even a ban (the decision remains at the referee’s discretion).

This is interesting: in 1976, the Australian band Sherbet recorded the song of the same name Howzat, which not only took first place in the charts of the Green Island and New Zealand, but was also highly appreciated in the United States and Britain. The track has still not lost its popularity and is regularly included in the lists of the best songs of all time.