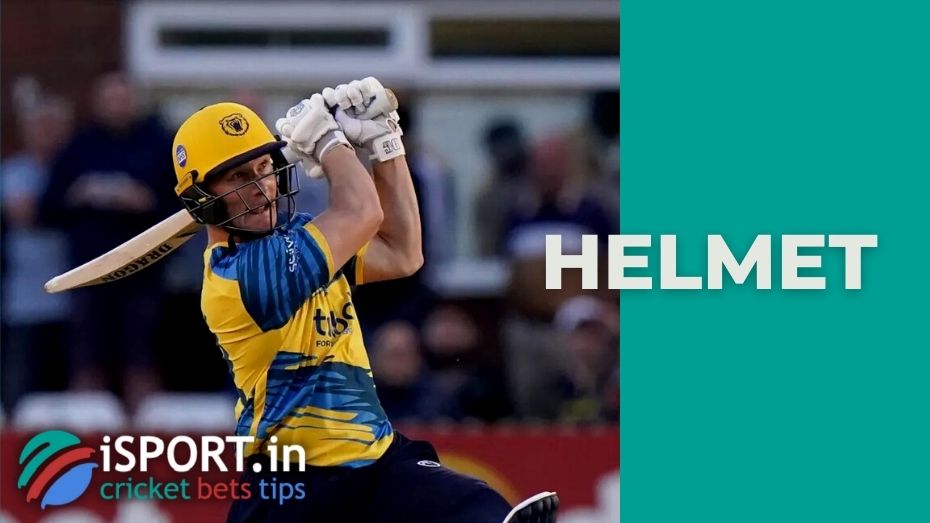 Helmet – a cricket helmet, an essential piece of equipment. It began to be widely used in the second half of the twentieth century.

Cricket is not the most traumatic game, but additional protection is indispensable in some positions (for example, the wicket-keeper). It is known that players tried to create the necessary equipment items on their own already in the 30s of the last century – for example, Patsy Hendren entered the field in a homemade hat designed to protect his head. However, prototypes of the first helmets did not appear until decades later.

One of the first cricketers to make them fashionable was Dennis Amiss, who wore a specially fitted motorcycle helmet before pitching. Later, he was joined by Mike Brearley, who developed his protective cover design, and then Graham Yallop, who was the first in the history of test cricket to go to a match in a helmet (March 1978).

Even though some cricketers (for example, Tony Craig) considered helmets not only unnecessary but also outright dangerous, explaining this by the fact that bowlers would no longer rely on force on impact, they quickly became fashionable. Viv Richards was the last batsman to not wear a helmet on principle in test matches, who retired in 1991.

Currently, cricket helmets are manufactured according to ICC standards. Interestingly, the organization refused to make the wearing of helmets strictly mandatory in 2017, leaving the final decision to each country with test status (the only exception is players who are under 18). For example, the England and Wales Cricket Board has ordered that batsmen and wicket keepers and fielders who are less than 8 yards from the wicket must wear helmets. At the same time, batsmen in India and New Zealand are not forced to do so if they think they can do without additional protection.

According to the current ICC rules, a batsman who intends to protect himself can enter the field only in a helmet that meets the British standard BS7928: 2013. Helmets are made from ultra-modern shock-resistant materials – ABS plastic, titanium, steel, high-density foam, and so on.

There are six standard Helmet sizes:

Modern cricket helmets are made from the following materials: