Batting for a draw 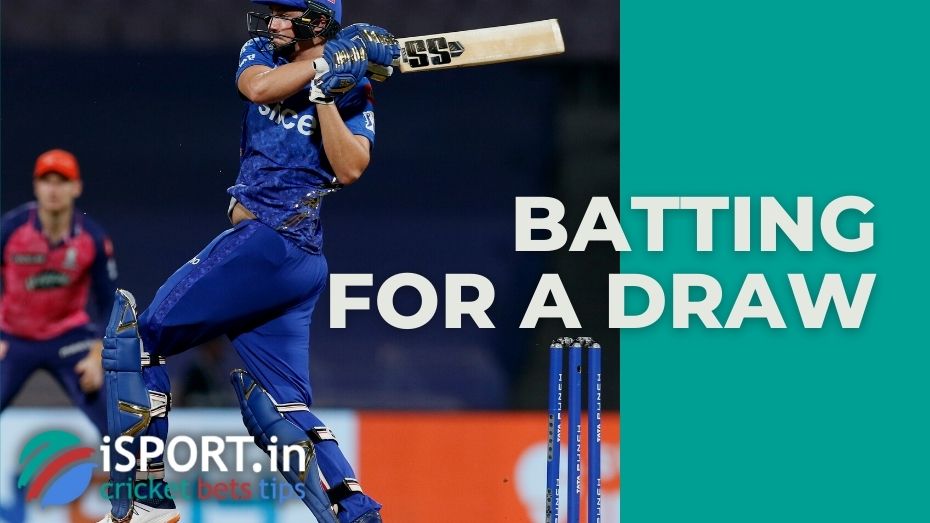 In cricket, there are several options for the outcome of a match: victory, defeat, draw and tie. Batting for a draw is a defensive strike from a team with a slight advantage but does not risk playing for a win and strives to keep a draw result.

Batting for a draw: the basic meaning

It is difficult for people who have never followed cricket to understand how a match that lasts for several days can be a draw. For example, meetings in tennis and basketball always end with a victory for one of the teams. There are draws in football, but only in regular championships or group stages of major tournaments. In cricket, there are three circumstances in which a draw is recorded at the end of a match:

It is noteworthy that the teams do not have to have the same number of runs for a draw. It is also important to know that draws only happen in first-class cricket matches. They involve 11 players in each team. From the batting position, each team plays two innings. Matches involving full members of the International Cricket Council are considered first-class. Also, meetings held in the national championships of these countries receive a similar status. One of the most prestigious domestic tournaments are the championships of Australia, India and England.

Striving for a draw, the team is set up primarily to protect its own wicket. She has no goal to score a lot of runs and aggressively hit the ball. Sometimes the endings of such matches look very boring, but sometimes there are exceptions.

Batting for a draw: what is the difference between draw and tie

Sometimes it is difficult for novice cricket fans to distinguish a draw from a tie. In fact, everything is simple. For a tie, it is necessary that the number of runs of the teams matches. In this scenario, the bowling side will take the last wicket to end the game in their favor. But the opponent will make every effort not to allow the bowling side to take one more run.

Let’s assume that the national teams of India and Pakistan met on the field in a test match. The Indians are the first to play on the batting side. Let’s say they score 300 points. Pakistanis score 250 points. Then the Indians take only 200 points, and the Pakistanis again 250 points. Thus, by the third inning, the teams approach with equality of 500 points each. Since the Indians scored more points in one of the innings, they have the right to choose. If the Indian team chooses the final wicket for Pakistan, then a tie can be counted in the match.

Ties are rare in cricket. There were two known cases in history when similar results were recorded in international matches:

At the same time, draws are much more common in cricket. For example, let’s look at the statistics of matches of the famous series The Ashes. Immediately 91 matches between the national teams of Australia and England ended without a winner, and the series also recorded draws six times.

Batting for a draw: what other outcomes can there be?

Can there be other results in cricket besides a win, a loss, a draw and a tie? Yes, sometimes you can see the inscription “No result”. Most often, it appears if weather conditions interfere with the match (most often rain). In this case, the weather does not allow the teams to play a certain number of overs, after which it would be possible to identify the winner:

If the game received “No result”, then a draw must be held after it.

Also, the match can be abandoned, and this also happens due to bad weather conditions. In this case, meetings are most often resumed if we talk about matches taking place for over several days. If these are one-day matches, the umpires have the opportunity to use the DLS method, but in this case, the condition for the number of overs played (either 5 or 20) must also be met.