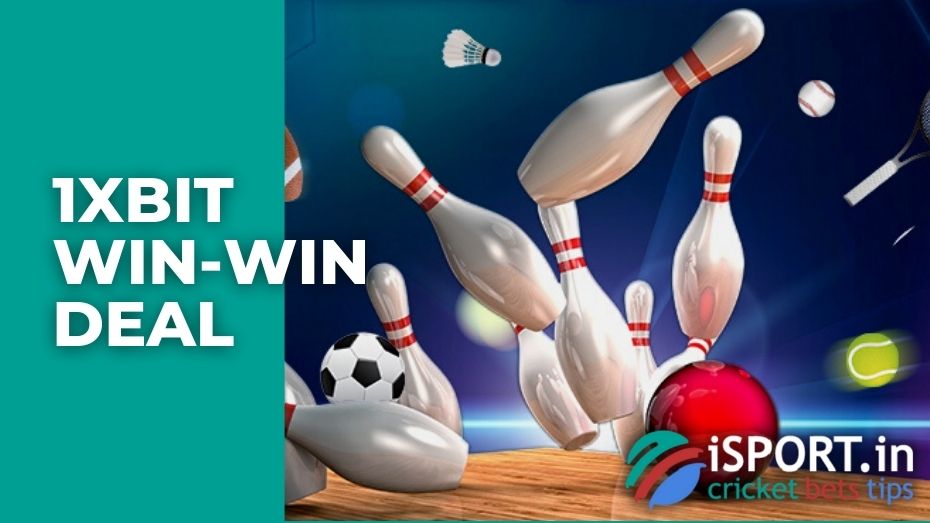 Is it possible to return the full amount of the sports bet if you missed the choice of the outcome? And to get this money immediately to the main account without the mandatory wagering in such cases? If you ask this question to an ordinary bettor, he will surely say that this does not happen, and he will be wrong. Today we will tell you how 1xBit Win-win deal works, what needs to be done to return the money spent on the accumulator and why this bonus is so popular with the company’s customers.

1xBit Win-win deal is one of the permanent bonus offers for those who prefer sports betting to online casino games. The terms of this incentive program are so simple that even a beginner is unlikely to make a mistake, but first, it’s better to use the instructions:

1xBit Win-win deal is automatically activated after registering a coupon that meets the promotion conditions. Be careful: the bonus list includes only accumulator stakes that consist of at least six events, provided that the minimum odd for each exceeded the 1.40 mark. Neither the sports discipline nor the section – Sports or Live – are not important. You can stop at six matches from the top leagues or choose matches of a minor tennis tournament, mark one of the basic outcomes (H, A, D) or, on the contrary, include more rare and complex ones in the coupon (for example, the total number of corners per half or minus handicap). The main condition is that the stake must be made for “live” money. The accumulator itself must not overlap with other bonus offers of a similar type (in particular, with the Accumulator of the day, which entitles you to receive an additional 10% of the winnings).

Thus, 1xBit Win-win deal is considered concluded after you have done the following:

And here we come to the main thing – what exactly gives 1xBit Win-win deal to bettors. Agree, that not every user, especially a beginner, has enough experience to make complex bets because correctly estimating the probability of several outcomes is not an easy task even for an advanced player. Many people refuse to take the risk primarily because even a single miss nullifies the entire accumulator.

1xBit Win-win deal was developed for such situations. So, if one event has not played in your coupon, you will receive the entire amount of the stake back to the account without any additional conditions. You can activate this bonus daily, but be careful: so, cancellation or refund for one of the events in the coupon is not a reason for its accrual (in other words, if it was calculated with an odd of 1.0, then the entire amount of the rate will burn).

Good luck in the game!