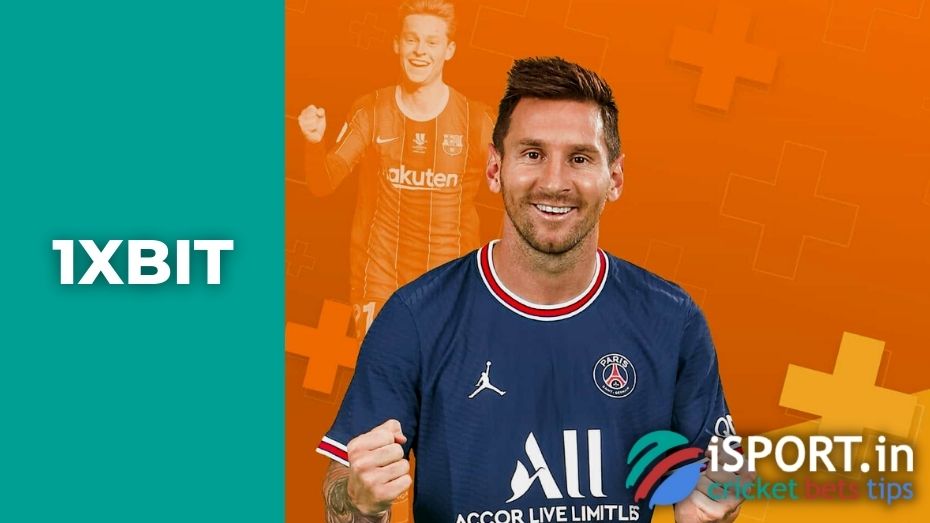 1xBit is a modern platform that allows you to earn bitcoins and other cryptocurrencies for sports betting, casino games and other entertainment. We offer you to study the 1xBit review and get to know the company’s services better.

1xBit came into the sports betting and gambling entertainment industry in 2016. Even though a lot of time has passed since that moment, the platform remains in demand and unique in its own way, standing out against the competitors with non-standard transaction methods.

The fact is that all financial transactions, whether it is making a deposit, calculating winnings, issuing cash prizes for participating in promotions or withdrawing funds, occur exclusively in cryptocurrency. Thus, by betting on the site, players have the opportunity to earn valuable bitcoins without mining and significant investments.

As for the documents, 1xBit operates under the international license of the island of Curacao – the one that most bookmakers have. 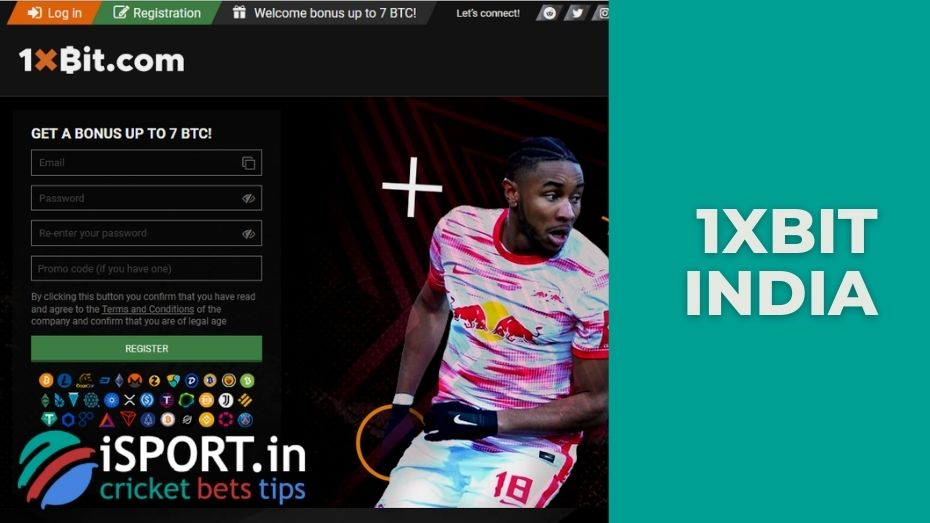 Our 1xBit review will begin with a review of the company’s official website – a platform where hundreds of thousands of users make bets and gamble.

Today, the official 1xBit website is designed in the company’s corporate colors: black, white and orange, with occasional patches of green. Through the entire site there is a through top panel with key services and functions of the resource:

There is a line with the key information above the panel with sections needed by each bettor:

The site’s main page is designed quite unconventionally. It will not be possible to find a lot of information and a betting line on it, like most bookmakers. Instead, 1xBit has placed a large banner with current sports events and promotions, a quick registration window and tiles duplicating key sections with services.

This approach of the 1xBit website has both positive and negative aspects. The advantages, of course, include the fast loading speed of the resource and accelerated navigation, due to the lack of an abundance of information. Curiously, these same criteria can also be considered disadvantages, since many bettors are used to finding top events on the main page and making instant bets without surfing the site. 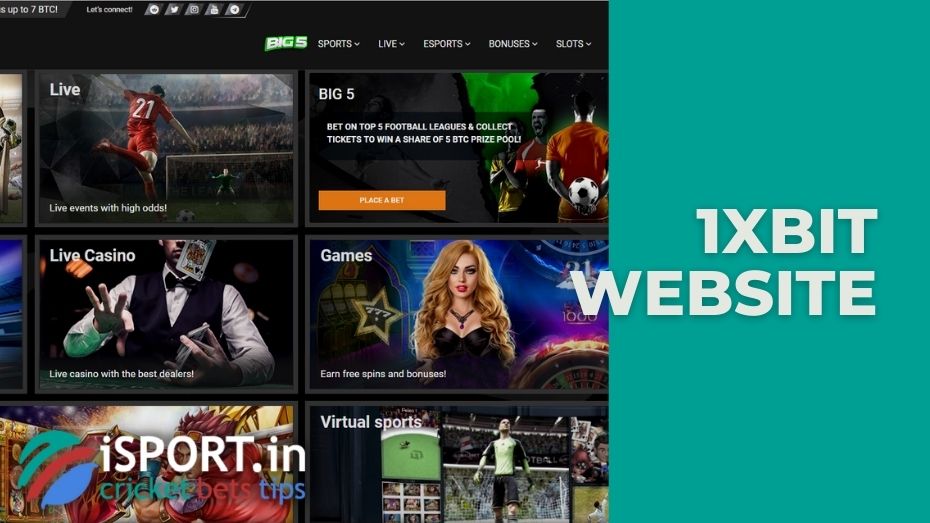 The process of creating an account is One of the most interesting moments that you can meet in the first minutes of your stay on the site. We decided to do a 1xBit review of this short but interesting procedure.

Users who have ever created a gaming account on the bookmakers’ websites or online casinos remember that the sites always request basic information about the future client. Even when registering in 1 click, bettors need to specify the country of residence and the currency of the account.

1xBit registration doesn’t have this. All the player needs is to click on the “Register and get a bonus” button, after which the account will be considered created.

Specify the 1xBit promo code isport during account creation to receive a welcome bonus. The combination will give a reward for the first four deposits, allowing you to get up to 7 BTC for the game at the company’s expense.

The platform will independently create an account number and password for the new user after registration. We recommend saving this data immediately (information can be sent to e-mail, saved to a file or a picture) so as not to experience difficulties with authorization on the site.

Doing (and reading) 1xBit review, you can notice that the company is quite non-standard. Because of this, many users will probably have a question: how are things going with making a deposit and withdrawing winnings on the site? Let’s tell you now. 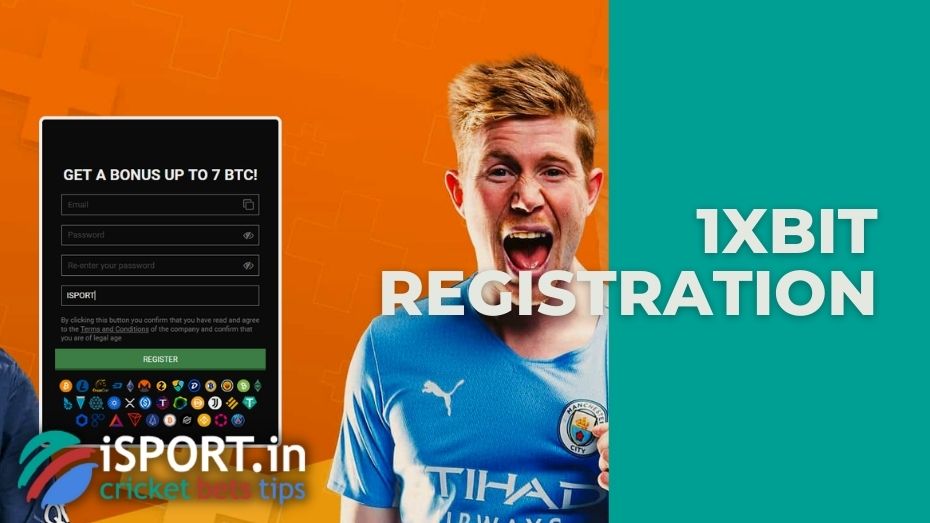 You can make a deposit only by digital means, the minimum deposit amount is 0.01 mBTC. If a cryptocurrency wallet has not yet been created and the necessary currency has not been purchased, it can be bought in special exchangers through the official 1xBit website.

The 1xBit withdrawal occurs in the same way as the replenishment of the gaming account – the winnings can be transferred exclusively to a cryptocurrency wallet. Bank cards, electronic systems and other methods are not supported by the platform.

The bookie draws attention to the fact that the transaction should be carried out with strict observance of cryptocurrencies. For example, it will not be possible to withdraw Dogecoin to a Bitcoin wallet – the funds can either return to the game balance or burn out during the conversion process. However, it is possible to open accounts in different cryptocurrencies on the site, which will significantly facilitate transactions.

Withdrawal limits depend on the chosen cryptocurrency. For example, you can withdraw from 0.01 mBTC (2.29 mZEC) to ZCash, while a Bitcoin wallet will request significantly more – at least 5.00 mBTC. 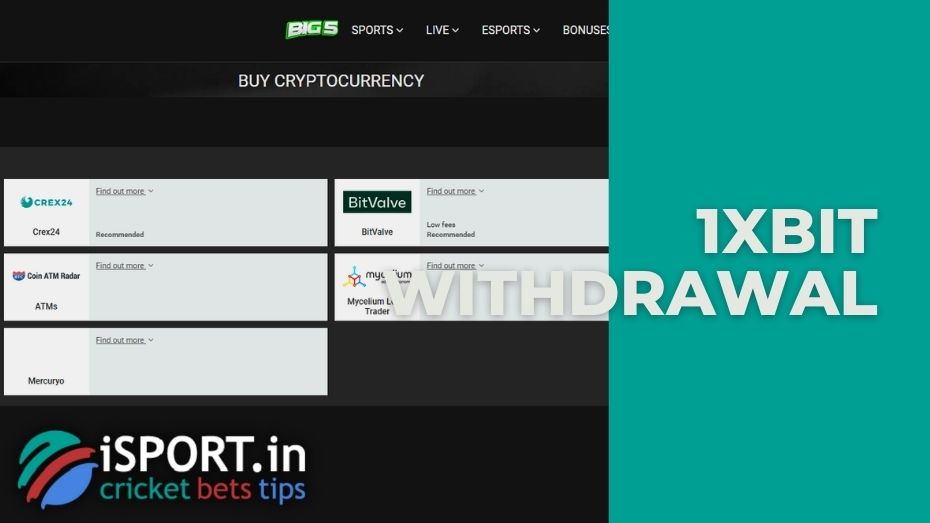 Despite the abundance of entertainment on the site, the company is primarily focused on accepting sports betting. We made a 1xBit bet review of each of the three sections:

Let’s start with the pre-match sports of the bookmaker.

The first thing we want to pay attention to when analyzing the 1xBit sports is its structuring. Despite the variety of sports disciplines, they are all arranged logically, allowing the bettor to find the right tournament quickly:

It is worth noting that you can do 1xBit bet review indefinitely due to the variety of sports and options for betting. We decided to focus on a few criteria and highlight the key points.

There are a lot of sports that you can bet on in 1xBit. These include both popular and rather exotic disciplines. It is especially pleased that the bookmaker is trying to fit several international and local tournaments into each of them.

The largest number of sports can be seen in long-term betting. Since the events for which it is proposed to make a bet can come both in a few weeks and in a year, the most atypical disciplines for betting appear in the sport: figure skating, martial arts, sports climbing, skateboarding.

By the way, 1xBit bet accepts not only sports but also events far from it. In the “Special bets” section, you can find a lot of interesting options for betting, ranging from the personal lives of celebrities, ending with forecasts for TV shows, awards, politics, movies and TV series. 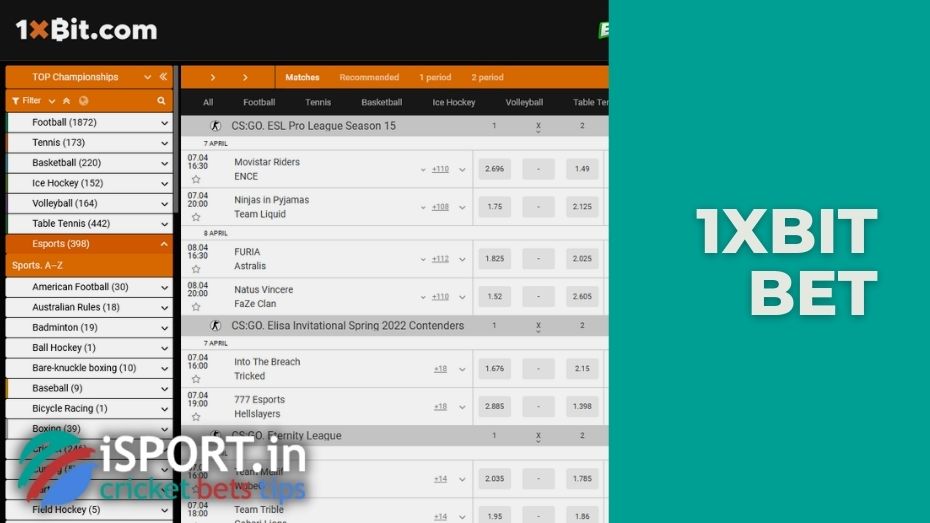 As mentioned earlier, the company tries to cover every discipline broadly. Almost all sports include both international tournaments and local competitions. For example, in football, experts analyze hundreds of events, starting with the Champions League, Europa League and Euro, ending with national tournaments and friendly matches.

Experts give 1xBit bet a huge number of options for betting, ranging from classics (match outcome, goals, handicaps, totals), ending with more interesting versions: deletions, red and yellow cards, video reviews, team successes and indicators of a particular player. The company also accepts forecasts for the outcome of the entire match and time intervals for individual.

Live 1xBit bet is in no way inferior to the pre-match sports and there are several reasons for this. Firstly, it is still the same excellent structure of subsections that helps players instantly navigate the site.

Secondly, it is a variety of options for betting. Unlike competitors who offer no more than 100 events for all sports at an unpopular time for betting, 1xBit analysts always find a lot of relevant events taking place around the world.

Thirdly, it is the company’s emphasis on video games. It’s no secret that recently this direction has become very popular in bookmakers, but 1xBit experts decided to go beyond the already boring bets on Dota-2, CS: GO or LoL, and offer to bet on many popular online games.

So, players can bet on the results of a daily event in an MMORPG or the results of a guild battle in a mobile game. Also, the company’s website accepts live bets on games familiar to everyone from the Play Market and AppStore, such as Angry Birds or Sea battle.

We reinforce all this with an excellent action line and a huge number of betting options, regardless of the scale of the match, and we get the dream realized in practice even for the most demanding betterer. 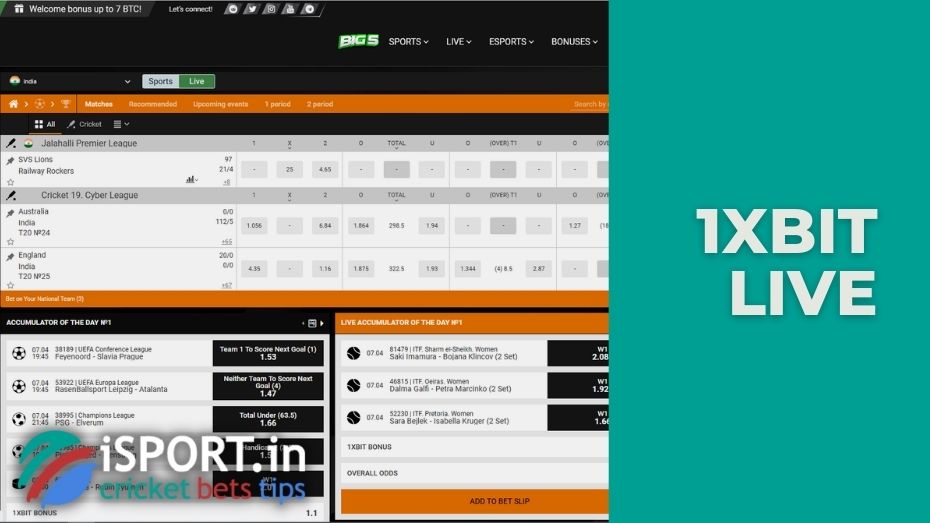 The “Esports” section in 1xBit bet is not currently a separate independent product of the company. Bets on video games are simply placed in a separate category so that users who are not interested in ordinary sports can quickly find the necessary events.

However, it is worth paying tribute to the company – 1xBit analysts have worked hard to make the “Esports” category look as full as possible. So, in the pre-match line, experts offer more than 500 betting events, each of which has a decent action line and pleasant odds. 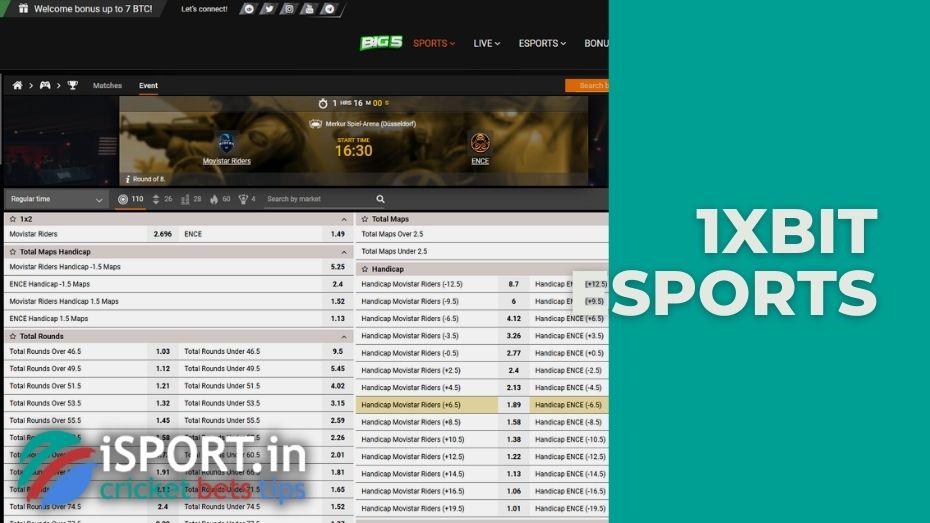 Like most sites, 1xBit gives its players bonuses and holds promotions among the most active customers. The company’s loyalty program can be divided into several categories:

Thus, 1xBit bonuses are excellent support for players in any situation: at the start of the game on the court, during a series of unsuccessful bets, when there is a shortage of funds on the balance sheet, waiting for a new match, etc. In addition, playing on the site is not boring, because every day the company’s representatives come up with new quests to bring variety to the betting life. 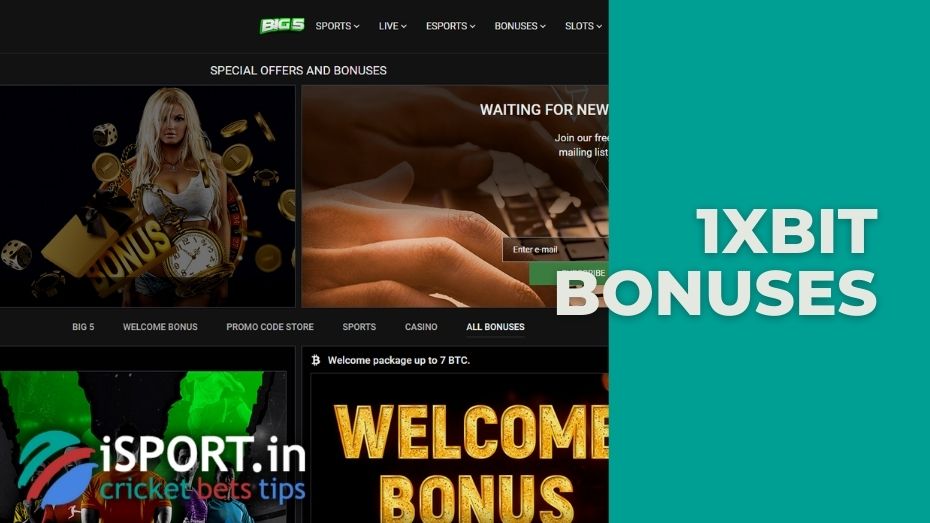 Sports betting and gambling switched to an online format more than 10 years ago, which once seemed like a real miracle. Nevertheless, technology does not stand still and now company websites are slowly moving to smartphones. However, this is not surprising, because modern mobile phones are in no way inferior in power and functionality to average computers and are always at hand.

In general, making 1xBit app review, it is worth noting that the developers put a lot of effort into creating the program. The app meets all modern standards, has a stylish design, thoughtful navigation and good protection. The company’s customers who have installed the software on their devices not only get uninterrupted access to the company’s services, but can also play, make bets, and make transactions at any convenient time.

On the whole, 1xBit review showed that the company’s representatives created a high-quality product that will appeal to many betting and gambling entertainment lovers.