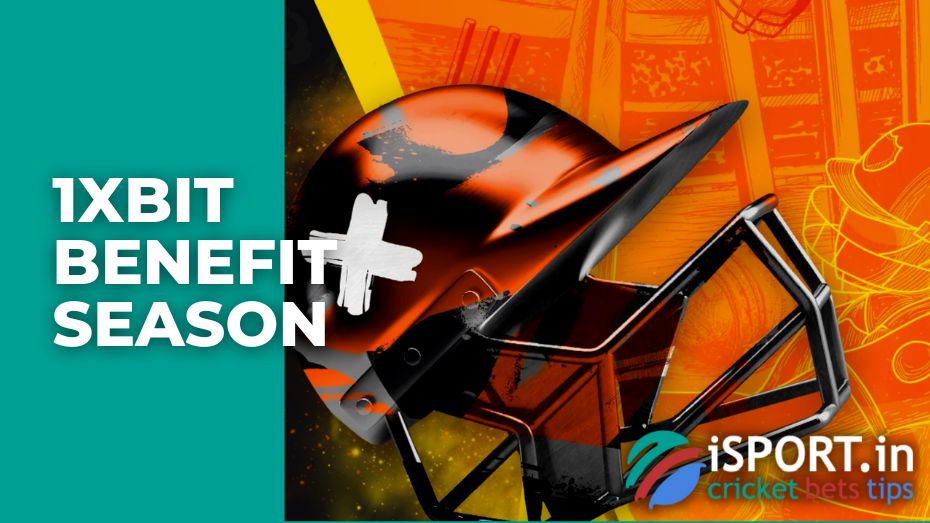 Do you like cricket? Actively follow the matches of your favorite league? Then don’t miss the 1xBit BENEFIT SEASON – an action for those who are in their’s element in the cricket section and are ready to take a risk to make the longest winning streak of bets!

The 1xBit BENEFIT SEASON summer promotion is addressed to all cricket fans without exception. Whichever club you support, whichever league you prefer, your interests will be taken into account here, and your successes will be awarded:

So, what do you need to take part in the 1xBit BENEFIT SEASON promotion?

Attention: if you are registering in 1xBit for the first time, do not forget to use the special ISPORT promo code, which entitles you to receive a starting bonus of up to 7 BTC. If you already have your account, you can skip this point – registration of the second and subsequent accounts is directly prohibited by the rules of the site.

1xBit registers several types of stakes, which even the most inexperienced bettor has probably heard about – this is a single, accumulator and system. However, only the first type of bets that meet the following requirements are taken into account in the 1xBit BENEFIT SEASON:

Only those stakes that were made for real money are counted. In other words, if you have activated another promo in parallel, do not use money from the bonus account when placing bets on cricket matches, since they will not be taken into account by the system. Promotional status is also not assigned to canceled, bonus, advance and sold bets.

At the same time, the markets can be any. Moreover, if you wish, you can place several rates on one match, but be careful: if bet № 1 loses, the entire series is reset and the countdown starts from the beginning.

Let’s say you have registered two coupons for the match of England against Sri Lanka in the framework of the Commonwealth Games (women), two more for the match of New Zealand against South Africa and three for the match of India against Pakistan. If the first and third bets went in, and the fifth lost, then your winning streak will be two matches. If you missed bet № 1, then the countdown will start from zero.

If two or more participants of the 1xBit BENEFIT SEASON prize race claim one place, the advantage will be given to the one whose stakes have the highest average coefficient.

Let’s go back to our example.

So, if the average odd of your winning streak of two matches was 3.7, and your opponent, who also correctly guessed two outcomes in a row – 3.4, then you will automatically beat him by one step and will be able to claim a larger amount.

The final calculation and accrual of prize money is scheduled to be completed on the 19th. Neither wagering nor performing any additional actions are required from the winners: you will be able to withdraw your winnings in any way convenient for you immediately after receiving.