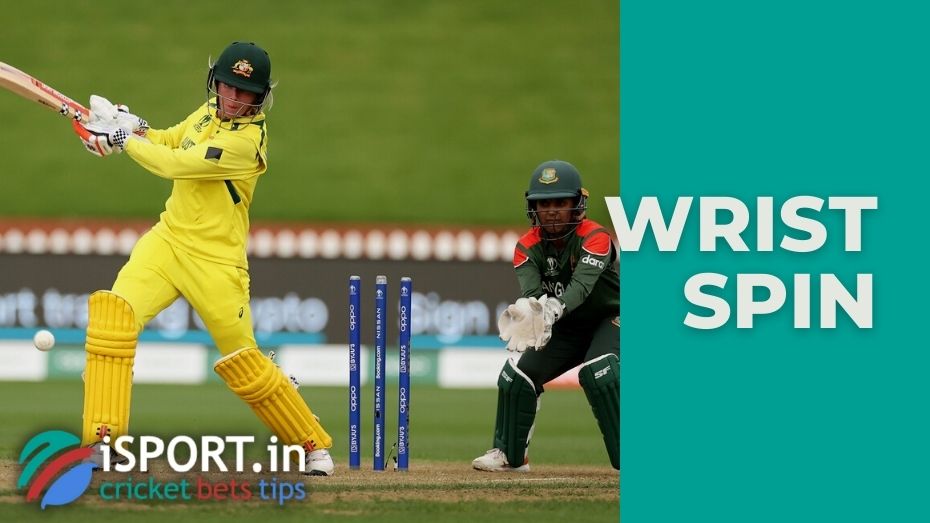 Wrist spin is one of the most common bowling techniques in cricket, the opposite of Finger spin, in which the fingers direct the course of the ball. With a Wrist spin, the bowler releases the ball from the grip to pass under the little finger. In this case, right-handed players ask the ball to spin counterclockwise, and left-handed players – clockwise.

In the strict sense of the word, the Wrist spin is not an entirely accurate term, since at the time of serving of this type, the player’s hand is in a pronation position, and his fingers tightly cover the ball from the inside. Releasing the ball from the grip, the player “cuts” its edge, giving him the necessary rotation. Additional speed can be given in two ways:

The effectiveness of the Wrist spin depends on the balance between the feed rate and the spin set by the bowler. If the first component leaves a lot to be desired, the attacking player must compensate by rotating it and vice versa.

It is noteworthy that, although the Wrist spin for left-handers and right-handers essentially differs only in the direction of spin, they often talk about two types of serves, implying the direction of the ball bouncing at the moment of contact with the pitch:

In addition, Wrist spin serves include:

Leg break. The ball is caught so that the seam is parallel to the palm. The index and middle fingers are spread apart, holding the projectile. The ring and little fingers are closed, resting on the edge. The ring finger sets the ball to spin. At the moment of serving, the wrist goes to the hip, then in the direction from right to left, and the palm is unclenched, sending the projectile upward.

Googly (also Bozi – in honor of the inventor of this type of feed, Bernard Bossanquet). It differs from Leg break in direction: if the ball is directed to the left in the first case, then the target side is right here. To do the Googly correctly, you need to bend your wrist sharply while pronating the arm and rotating your shoulder in the opposite direction. Thus, the elbow goes up while the back of the hand is turned forward, and the ball is twisted clockwise. It is worth clarifying that the Googly can be performed differently by spinning the ball with your fingers even before the serve.

Topspinner. In this case, the rotation can be set by both the wrist and the bowler’s fingers. It is not for nothing that the Topspinner has the same name as one of the most popular tennis serves: it is based on the Magnus effect, caused by the action of vortex air currents flowing around the projectile during high-speed rotation.

The main feature of the Topspinner is that a properly handled ball lands faster, covering less distance than a batsman would expect, and bounces in a direction that is almost impossible to predict with 100% accuracy. At the same time, the back of the bowler’s hand is facing the Cover, the palm is facing the Midwicket, and the projectile itself goes along a straight trajectory at the time of the serve.

Slider. The opposite of the Topspinner. At the time of the serve, the batsman does not see the ball’s grip as the bowler turns his hand with the back facing him. The rotation is set with the wrist and ring finger, while the ball goes further than in the case of the Topspinner, but bounces not so far and can also change trajectory, which makes this serve quite inconvenient for the batsman.

It is believed that Shane Warne invented the Slider. Still, other players successfully used it, who, however, did not distinguish it into a separate category (for example, Richie Beno).

Flipper is a type of reverse-spin feed controlled by the thumb, forefinger, and middle finger. In this case, the ball overcoming more distance than in the Topspinner and bounces quite low, which again creates a lot of difficulties for the batsman, who often does not have time to transfer weight forward. To perform the Flipper correctly, the bowler must tense his wrist and literally “push” the ball forward with his thumb and forefinger.

It is interesting: Googly is considered one of the more insidious varieties of Wrist spin. In most cases, the bowler tricks the batsman by throwing the ball in the opposite direction. However, this type of serve is performed infrequently since it requires the attacker’s experience and skill.