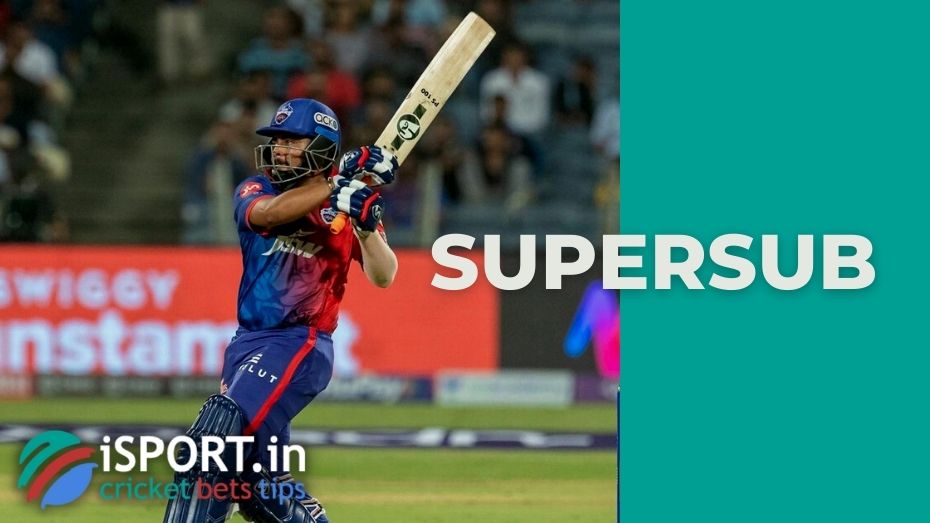 In cricket, the rules are periodically adjusted. Experimental conditions are introduced, and athletes and fans watch how it affects the game. And innovations are not always successful. An example of such an experiment is a SuperSub.

This article will tell you what the term Supersub stands for, how it appeared and what it was used for. In addition, we will try to figure out why the innovation did not take root in cricket.

SuperSub in cricket: definition of the term and a brief history

First, you need to give a clear and understandable definition of the term in question so that it is easier to understand its essence. What we, in fact, are doing.

SuperSub is an experimental rule in One-day International cricket, in effect from July 2005 to February 2006. SuperSub was called a substitute player who could come out and replace any athlete at any time during the match.

It would seem that cricket already has a similar rule – Substitute. However, unlike him, the SuperSub implies the player’s right to perform any functions on the court. That is, he can serve the ball, and hit, and keep a wicket.

As you can see, the SuperSub rule didn’t last even a year. Initially, its goal was to increase interest in One-day International format cricket, but it turned out to be the opposite effect in the end.

It should be noted that the first SuperSub player in the world was the English batsman Vikram Solanki, and this happened on July 7, 2005 in the England match against Australia. And the first captain to use this rule was Michael Vaughan.

SuperSub in cricket: why this rule sparked controversy

Changes to the rules in cricket are regularly controversial. Even a seemingly necessary DRS system is also periodically criticized. However, most likely, it is SuperSub that is the least popular innovation, which was very harshly received by players, coaches and spectators, which is why it did not last even a year.

But why was the SuperSub rule so negative? After all, almost all major team sports include the concept of replacing a player in one way or another to replace an injured athlete or change the tactics of the game (for example, football, where often substitution is made even in the last minutes of the match).

The SuperSub rule was aimed at changing the standard substitution conditions in the ODI. The idea was that before the draw and the main starting line-up, each team had to name its player SuperSub, who could, if replaced, take on any role in the team. This would allow, for example, to get the team a effective replacement in case of injury of a player and not just “take the athlete out of action.” SuperSub supporters believed that this would affect the quality of the game for the better. It was argued that the competition could be much better if, for example, a high-quality bowler who had contributed while their team was bowling could be replaced by a capable batsman rather than at best take part as a tailender with limited batting ability. The batsman who, after his innings, could do little with the ball on the field could be replaced with an out-and-out bowler who could have a greater impact on the outcome of the match. According to supporters of SuperSub, the presence of such players can improve the entertainment of cricket matches.

However, regardless of its harmlessness, the introduction of the SuperSub led to a decrease in the competitive component of cricket. In particular, an indictment has been made against the SuperSub rule, according to which teams that won the toss, already having an advantage, would benefit even more from using a substitution. Since teams had to select their SuperSub before the draw, most preferred to pick who would be most useful in the event of a successful toss. Typically, teams chose a batsman as the SuperSub to replace a poor bowler in the hitting position. However, this meant that the losing team would be put in to bat with only a batsman as their substitute, which would be largely unhelpful for when it was their turn to bowl. Thus, many complained that the competition had actually turned into a 12v11 tournament in favor of the team that won the toss. Perhaps, such situations could have been avoided if the captains chose more versatile players, but they, of course, think only about winning.

By the way, what was written above was also confirmed by statistics: during the period when the Supersub rule was in effect, about 60% of the teams that won the toss won the match (against almost equal odds before the introduction of this rule).

Given the unpopularity of the SuperSub rule, ICC had two options: to allow teams to choose SuperSub after the draw or simply to abandon the rule. The first option might have been acceptable, but this rule has already suffered reputational damage. Australian captain Ricky Ponting has generally stated that one-day cricket will not lose anything if SuperSub is canceled. Meanwhile, some teams refused to use the SuperSub at any stage of the match to level the playing field. Accordingly, the ICC’s choice was obvious, and this strange experiment in the form of a SuperSub made it to cricket’s history books.

You now have all the information you need about term SuperSub. What is your attitude to this rule? Share your opinion in the comments below this article.