Substitute: an overview of the cricket term 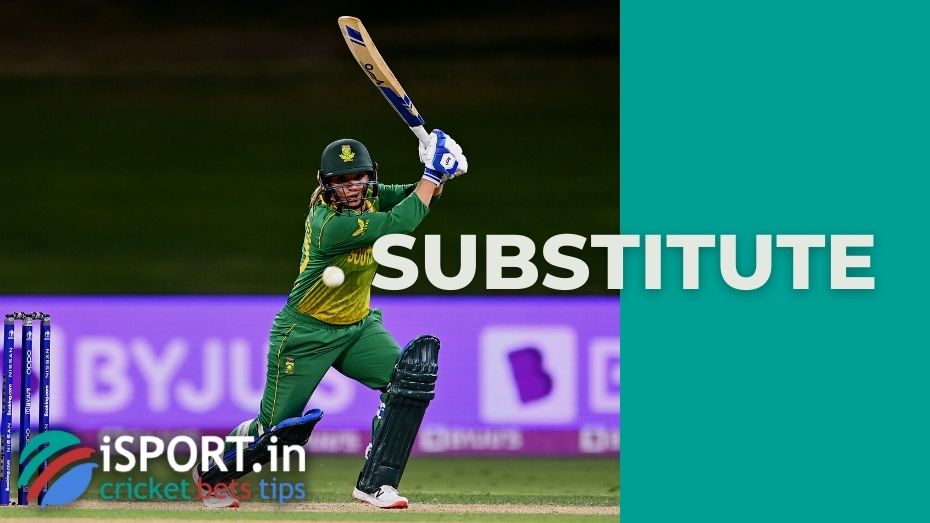 We continue to introduce our readers to cricket terminology. You can get the most out of this amazing yet challenging game by learning even the smallest concepts. Today we are going to talk about Substitute. However, the concept of “replacement” is in other sports also. But there are a number of its nuances in cricket. Details are in our material.

Substitute: what it means in cricket

Before proceeding with a detailed analysis of this term, it is necessary to give its general definition so that there is a minimum understanding of what is going on.

Substitute in cricket is a substitution of a player, which the referees authorize in the event of an injury or illness to an athlete that occurs after the players have been nominated at the beginning of the game.

Now let’s explain the specifics of the replacement since it does not happen in the same way as, for example, in football or hockey. In cricket, substitutions are allowed for injured players, but the substitute cannot bounce, serve, guard the wicket or take over as team captain. If the substituted player has fully recovered, the referee may return him to the playing field.

For example, a batsman who cannot run may have a runner who runs for him, and the batsman continues to hit. Alternatively, if a bowler is injured during an over, the substitute bowler must score the remaining serves. At the same time, the bowler chosen for this cannot be the bowler who threw the previous one and cannot be the one who should have thrown next. In this case, the substitute fielder is allowed to take catches like any other player.

Substitute has several other complex nuances. For a detailed description of this phenomenon, see Rule 24 of the Laws of Cricket. We have given a short definition so that new fans of this sport have an initial idea.

A brief history of Substitute

As far as students of cricket history know, the concept of Substitute existed in the 18th century, but it was called a little differently – “Seeker-out”. This phenomenon was first documented on September 5, 1748.

The practice of allowing Substitute in the 19th century was inconsistent. For example, there was a match between the MCC and Nottinghamshire in 1870. And substitutions were allowed at the beginning of this meeting. However, this decision was condemned by the press. As a result, the substitution was canceled by the end of the match.

The first-ever use of the Substitute in first-class cricket occurred in the University match between Oxford and Cambridge in 1891. Oxford player Frederic Teziner was injured while playing on the first morning of the match and was replaced by Thomas Keyes.

Substitute is now regulated in strict accordance with the rules of cricket and the decisions of the International Council and is not controversial.

One of the most commonly used Substitutes is a concussion replacement. There were calls for a rule clause that would allow substitutions to batter or serve if they went out in connection with a major head injury to the main athlete in the mid-2010s. Some countries even managed to experiment with the concussion substitute in domestic tournaments.

The International Cricket Board agreed to introduce the concept of a concussion substitute in all international cricket matches only in July 2019. The rule came into effect on August 1, 2019, but there was an important condition: the replacement must be “similar,” and the match referee must approve it.

Let’s explain a little. The referee must consider the injured player’s likely role during the remainder of the match when approving a designated substitution. If necessary, if the referee deems it necessary, he can impose some restrictions on the player coming on the substitute. This is done so that the strength of one team does not increase dramatically.

For example, if a pure batsman is injured and is replaced by a versatile player, the referee may prohibit that player from bowling in that match.

Substitute during the COVID-19 pandemic

Let’s go over modern realities a little. As you know, the COVID-19 pandemic has made its own adjustments to the sport’s rules, and cricket has not escaped this fate. So, the ICC approved a new rule in June 2020, according to which a player who tests positive for COVID-19 in the middle of a series will be immediately quarantined. He is barred from participating in the remainder of the series and will be replaced.

The Substitute rule for coronavirus had to be applied already in October 2020, in the first round of the 2020-21 Plunket Shield season. Then the player Mark Chapman announced that he was not feeling well and went to take a test for COVID-19. Following the updated substitution rules, Benjamin Lister entered the field instead.

Now you know the basic information about the term Substitute, which will make watching cricket matches much more interesting.