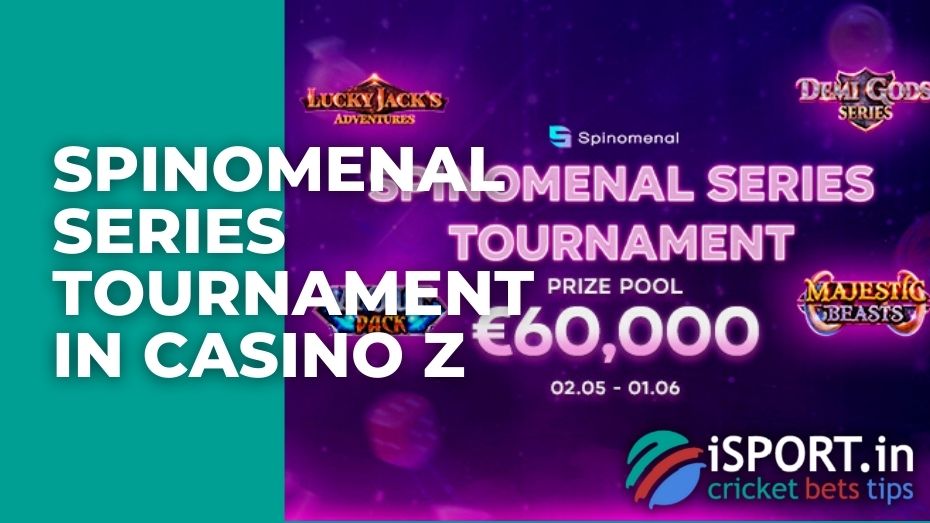 From May 2 to June 1, 2022, visit the official gaming portal and take part in a new profitable promotion called Spinomenal series tournament in Casino Z. Four rounds will be held during the whole month. There are 100 prizes in each tournament. The total prize fund of the entire promotion is 60,000 EUR. There is no need to win back money. Find out all the rest of the information in this article.

Casino Z is a well–known gaming company that has been promoting gambling on the Internet for several years. Every gambling fan will be able to place a bet for real money in slots, TV games, and games with live dealers. There are many ways to earn money on the site, as well as additional bonus offers.

“Special offers” is a section with all Casino Z promotions and tournaments. Promotional offers are regularly updated on the website. All this is necessary in order for a registered player to feel diversity and interest in gambling (and of course, another option to earn real money). Promotions can be invented both by the administration of an online casino and by third-party companies that supply and develop video slots.

For example, an offer called Spinomenal series tournament in Casino Z will be held on the casino’s website throughout May. The main sponsor of the prize draw is the popular gaming provider Spinomenal. Spinomenal is a team of professionals that has been creating gambling content since 2014. The company is licensed and operates thanks to the license of the Malta Gambling Authority. For 2022, Spinomenal has developed and released more than 100 modern video slots. By the way, in addition to slots, the provider has table games, as well as various electronic lotteries.

As for the present bonus offer, it will consist of 4 different stages. Each stage has its own deadline and its own rules. The total prize pool of the Spinomenal series tournament in Casino Z is 60,000 EUR. Let’s figure out how a registered user can compete for part of this amount.

To win in any of the rounds, you need to score as many tournament points as possible. To do this, the participant of the promotion needs to buy spins for real money in the qualifying games from Spinomenal. The list of slots changes in each round. The 1st stage will be held from May 2 to May 8, 2022. There are 100 prizes at this stage:

Tournament discipline: the participant of the stage receives 1 point for every 10 spins. All points are added to the total number. The minimum bet for the game is 0,2 EUR (or the equivalent in the player’s currency). It is possible to buy spins in 5 Spinomenal games:

Exactly the same number of prizes is registered for the 2nd stage. It will continue the series of tournaments from May 9 to May 16 inclusive. The prizes in this round are slightly higher:

To earn tournament points at this stage, the client must have some special symbols in slot machines:

The minimum price for one spin is exactly the same – 0,2 EUR. All accumulated points are summed up. The 3rd round starts on May 17th. To accumulate points here, a participant of the promo Spinomenal series tournament in Casino Z also needs to buy spins at a minimum price of 0,2 EUR. However, points are credited only for winning bets: 1 point for each winning outcome. There are 4 qualification games:

There are as many prizes and payouts in the 3rd round as in the 2nd. The bonus offer will end with the 4th, most profitable stage (from May 24 to June 1). The winners in this round are those who earn the most points for multipliers (the higher your win rate, the more points). The minimum bet is 0,2 EUR.

You can earn points in 3 slot machines:

All funds will be credited to the winners’ account within 72 hours from the end of the event Spinomenal series tournament in Casino Z. If 2 or more participants claim one place in the standings, then the prize will be taken by the one who collected the same number of points before the others. Log in or register on the Casino Z website and become a participant of the promotion. If there is no account, then create it profitably using Casino Z Promo Code – ISPORT.