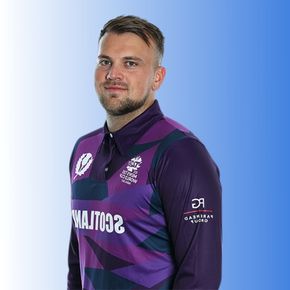 The future bowler initially saw himself not in cricket but football. However, as a teenager, he was diagnosed with Osgood-Schlatter disease, which affects bone and cartilage tissue in the tibia and is accompanied by severe pain, including the knees.

I started playing with my father on Saturdays at Leith Franklin CC, Mark said. – There is a pedestrian path there, and we had to stop often so that people could pass. My cousins still make fun of me, they say, who even plays cricket in Scotland? But my former classmates work in offices, and I can travel to warm countries.

Watt acts as a bowler, but he is rarely used only in this capacity, trusting the batsman’s bat from time to time. The Scot’s style is primarily suitable for playing with a white ball: he prefers wide flat shots and is very good at defensive actions on the field.

After playing for the second Lancashire XI, in 2018, Mark joined the main team of Lancashire in the English County Championship.

In 2019, he changed his club registration. Thus, to date, Mark Watt has two County Championship clubs in his track record:

In addition, the Scottish bowler managed to play for the Highlanders and Marylebone Cricket Club.

Mark Watt has been playing for the Scotland national team since 2015. The bowler’s debut came at the T20I competition, where the Scots faced Ireland. In July of the same year, Mark took the field for the first time in the ICC World Cricket League Championship, this time against the Nepalese.

In February 2016, Watts took his first five wickets in a match against the Netherlands at the UAE. In the same season, the Scot made his debut in first-class competitions, where Scotland faced the UAE in an ICC Intercontinental Cup match. Rapid progress, coupled with stable performances, soon brought Mark an invitation to ODI games: in September, he got into the application for a match against the Hong Kong team.

Of all the games in which Mark took part during this period, the confrontation with England in the ODI (June 2018) received special attention from the public and observers, from which the Scots emerged victorious, beating their rivals by six runs. Calum MacLeod, recognized as the player of the match, did not skimp on praise for the younger comrade, who recorded three wickets:

I think it was not so easy for a bowler to play so well at the Grange (the main venue of the Scottish national team) with its features. I suppose it was supposed to give him confidence in himself. He not only got the most out of the game, but also realized what exactly distinguishes the best top spinners. This brought variety to his game, and he began to try something new.

It was planned that Watts would take part in the first ever Euro T20 Slam, but the tournament was soon canceled. However, the bowler was soon included in the list of main team players for participation in the ICC T20 World Cup qualification in the UAE.

In the spring of 2021, he took his hundredth wicket in ODI matches for the Scottish national team.

Mark Watt: questions about the player