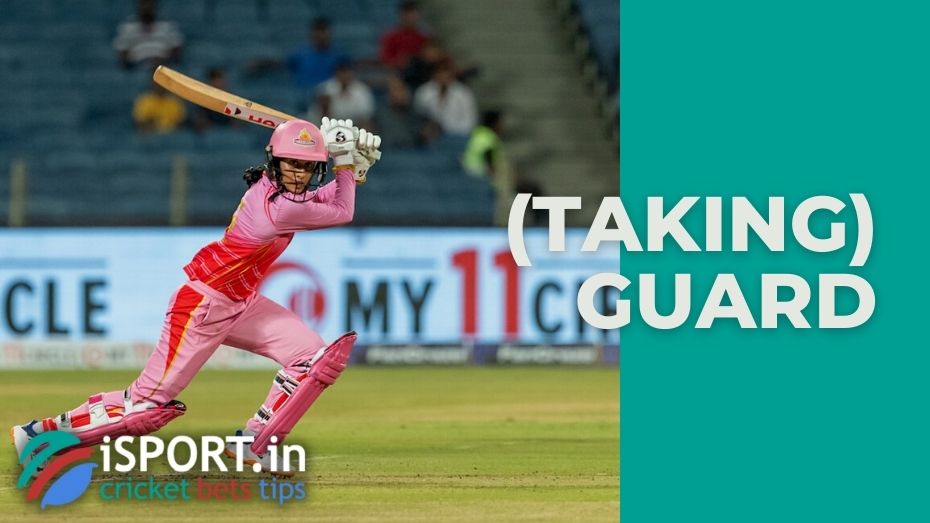 (Taking) guard is a specific cricket term that denotes the final choice of position by the batsman on the popping crease before taking the first ball. In some cases, it can also be used after a break or in any suitable episode.

The main purpose of Taking guard is the alignment of the legs, which allows you to make the protection of the wicket more effective. Even though this aspect of the game is among the basic ones, relatively little has been written about it, so Taking guard is often considered a purely psychological defense trick.

This is only partly true because, in fact, Taking guard not only gives the batsman confidence, but also activates the body’s memory. As a rule, during training, batsmen prefer to reproduce the same pose (body tilt, head turn, arm and leg position) relative to the wicket. Therefore, Taking guard allows you to automatically take the correct position on the pitch from the point of view of a particular player, focusing on receiving the ball. This, in turn, reduces the time that the player spends searching for key solutions – for example, refusing to perform a run, which can lead to removal.

There are three main positions corresponding to the wicket stumps:

Taking guard requires the help of a judge and consists of several mandatory steps:

There is a specific sign language that allows batsmen to quickly make it clear to the umpire which Taking guard is needed in a particular situation. So, when requesting Leg stump, the player either pronounces this phrase aloud or raises one finger up. As a rule, this option is chosen by batsmen who are on the Off-side.

The second option is requested by saying aloud “Middle stump” or “Center”. It is considered the most versatile and popular. The fact is that in the Middle stump position, it is easier for a batsman to assess the trajectory of the ball: so, if the projectile was directed at least a little to the right (provided that the batsman himself is right-handed), it can be missed, since the right stump of the wicket will definitely remain intact. Conversely, if the ball was directed to the left, the wicket may need more active protection. However, experienced players note that the probability of LBW (Leg before wicket) and subsequent removal increases in this position.

The third option, Leg-and-middle stump, can be requested by raising two fingers in the air. You should bear in mind that in this and other cases described, the decision of batsmen often depends on who is opposing them. For example, if we talk about a fast bowler, the batsman can at least make the standard stand wider or move slightly towards Leg stump.

Do not think that Taking guard is a constant value. The position of a batsman is influenced by many factors, starting with the state of the pitch and ending with the format of the competition. The vast majority of professionals use Taking guard as a starting point, “taking aim” already during the match itself and taking into account the team’s current success. Some are limited to changing the slope of the body; others can make a wide spade along the crease; rare virtuosos consider Taking guard a convention and prefer to improvise, but there are few such players.

This is interesting: experienced batsmen are advised to use the spikes of sports shoes in the process of Taking guard, making a mark with the toe or forefoot.