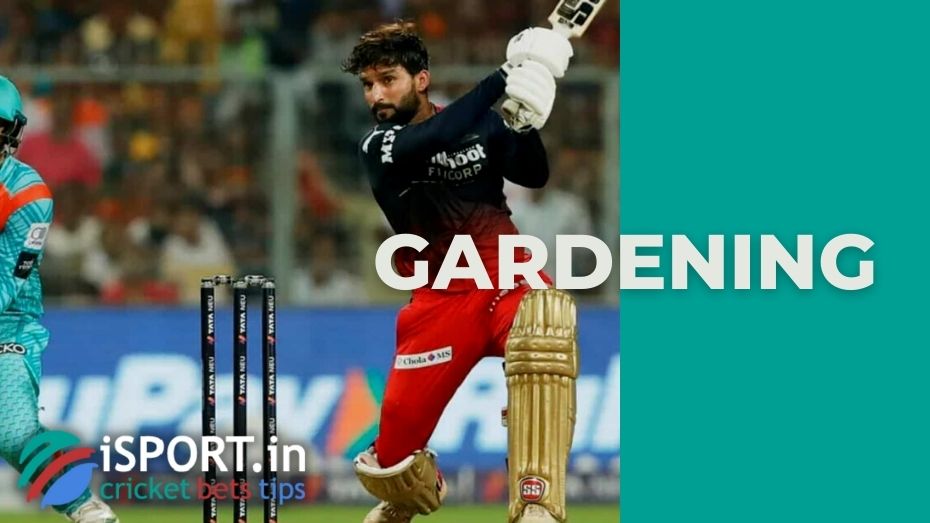 When it comes to a cricket match, the Gardening does not mean gardening or gardening. However, interaction with the field takes place in this case as well. This term is used in relation to the batsman’s actions and can play into the hands of the bowler.

What is Gardening in cricket, and what does it look like?

Imagine you are watching a cricket match, and then suddenly a batsman, in between innings, rests with the end of the bat in the field and begins to smooth out the dents left by the ball or spikes on his own boots. This action is called the Gardening.

It may actually look like gardening, but of course, its purpose is far from helping the lawn grow faster and thicker.

Typically, the Gardening is done right after the batsman misses a ball that goes past his nose or hits the ground near his ankle.

The reason for this action has several opinions from players and fans:

Be that as it may, the calm batsman and the flat field have not bothered any team yet. Many players do this, perhaps to some extent out of habit, and some consider it stupid.

How Bowlers Use Gardening

Glenn McGrath played for Australia for 14 years as a bowler and is one of his country’s greatest cricketers and the reason Australia dominated world cricket for almost a decade. Australians on the cricket field have always been known for being aggressive and considered the “bad guys”. In Glenn McGrath’s case, the Gardening means making the batsman doubt and then taking his wicket.

Nor do the English shy away from using the Gardening to their advantage, for example, William Gilbert Grace, one of the greatest cricketers. The case when he used the Gardening to his advantage became the most famous in cricket history.

It happened on August 29, 1882 during a test match between England and Australia at the Oval stadium. In the first half of the match, it seemed that the British, like many times before, were waiting for a victory, but only one player changed everything – Fred Spofforth, angry with the unsportsmanlike behavior of the opponent. It all started with the Gardening.

The legendary WG Grace, who played for the English team in that match, earned only 4 and 32 (scored only 4 and 32) but was able to throw Spofforth off balance and ignite a fire that eventually became the very Ashes (The Ashes), matches in whose honor they are still held.

During the match, the Australians lagged behind the British. The team captain, Billy Murdoch, was joined by a young player of the national team Sammy Jones. With 114 runs, Murdoch (played a ball to the leg side), while Alfred Lyttleton, playing as a wicket-keeper, ran across to field. The ball returned to WG Grace. Thinking that the pitch was over, Sammy Jones decided to take up the Gardening and left his position. Grace, without hesitation, took advantage of this and knocked out the player.

After that, Spofforth burst into the British dressing room, called Grace “a bloody cheat” and insulted him for another five minutes. He ended his speech with the words: “This will lose you the match”. And so it happened. An angry Spofforth accomplished an incredible feat: earning 7/44, taking seven for 44 and blowing England away for 77.

So the Gardening, to some extent, marked the beginning of the famous series The Ashes. Anyone could hardly say that this action was useless and did not lead to any results in that match.