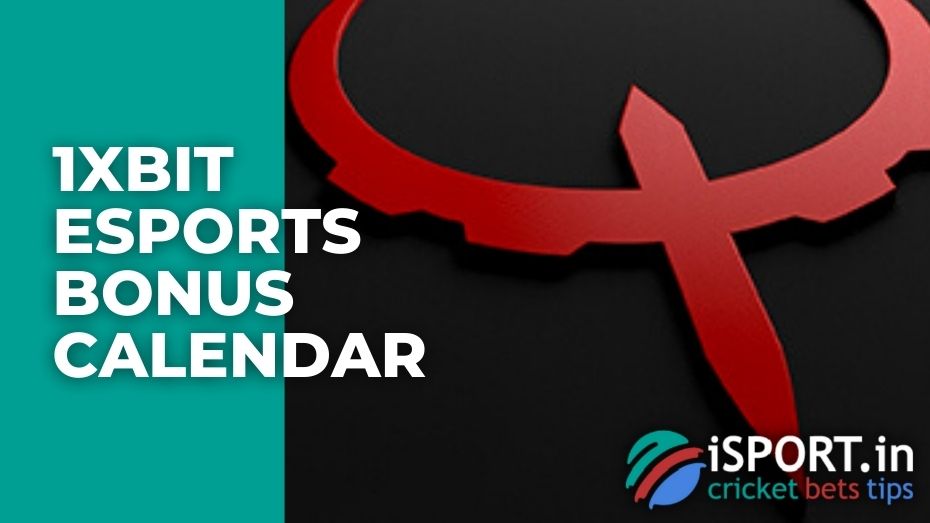 The esports section of the 1xBit website hardly needs a special introduction. A wide selection of events and betting options have made it one of the most visited. Nevertheless, even the regulars of the esports branch do not always pay attention to special incentives designed specifically for the most active players. We will tell you about one of them, the 1xBit Esports Bonus Calendar, today.

1xBit Esports Bonus Calendar: from betting on the discipline match of the day to receiving cashback

1xBit Esports Bonus Calendar is placed in a separate subsection, a link to which can be found in the upper menu bar (“Bonuses”). It is here that an updated list of tasks is published with an indication of a specific discipline, rules for placing bonus takes and calculating the percentage of return on funds spent. The organizers try not to repeat themselves, so if today you were offered to gamble on a League of Legends match, then tomorrow the task of the day may be Dota and so on. From a purely practical point of view, this is very convenient, because it allows you not to be limited to one discipline, gaining experience in several areas at the same time.

The standard cashback size is 10%. However, depending on the specifics of the task of the day, this value may increase. You will need to fulfill several key conditions to receive the specified deduction:

Attention: if you have not yet managed to register in 1xBit, do not miss the chance to get up to 7 BTC to a profile with an ISPORT promo code!

1xBit Esports Bonus Calendar also provides for some restrictions, some of which apply to all incentive programs of the company without exception. So, for example, it is strictly forbidden to place bets from two or more accounts, since the 1xBit rules do not allow you to register more than one account in your name. In addition, keep in mind that the maximum amount of daily cashback is 10 USD, so you should approach the bank’s planning carefully.

Let’s say the 1xBit Esports Bonus Calendar for Monday includes a League of Legends assignment. The maximum sum of cashback is 10 percent, while the rules allow betting both in Live and Sports. The key condition for victory is the fall of the nexus or the surrender of one of the parties, while the participants should keep in mind that leaving the game after the tenth minute of the match will not be considered as a motive for returning the funds. At the same time, the ten-minute rule also applies in the other direction: so, if the match lasted less than this period or one of the players was inactive for a specified time, the game is declared invalid.

The following types of stakes are taken into account when calculating cashback:

As already noted, it is necessary to place at least two dozen bets on the proposed conditions to receive cashback. Upon reaching this minimum, the procedure for calculating the bonus percentage is started, which takes into account not all bets, but only those that did not bring profit to the participant (burned out).

So, for example, if you made twenty bets of five euros each and won 70 EUR, then the amount of loss will be 30 EUR. Therefore, you will be credited 10% of this amount at the end of the game day, that is, 3 EUR.

Attention: we recommend subscribing to a special newsletter in the promo section to always stay up to date with new events from 1xBit.

Cashback received under the 1xBit Esports Bonus Calendar program is credited to the bettor during the day. It cannot be cashed out at the same time, since the refund takes place in the form of BP (bonus points), which can be spent in the “Promo Code Store” by purchasing a game session or spin.