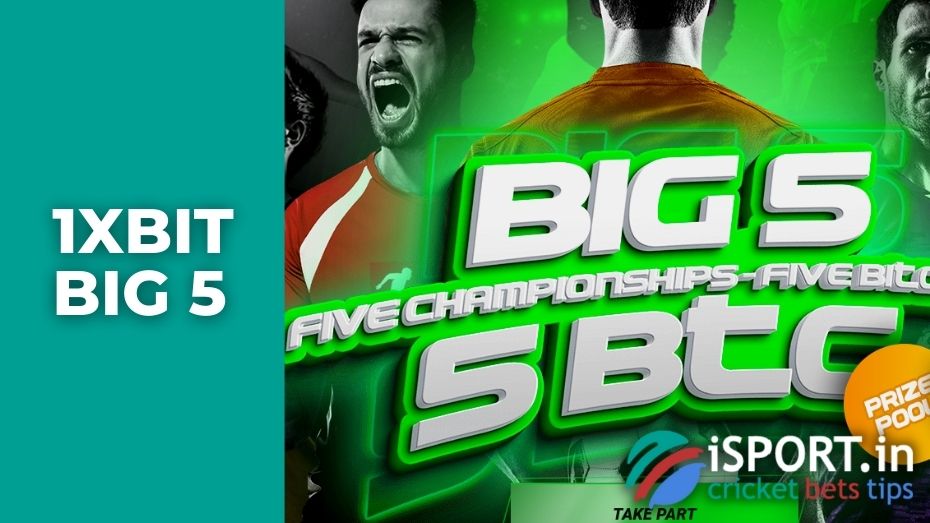 Despite the growing interest in minor football leagues, which has been noted in recent years, the Big Five (English, Italian, Spanish, German and French championships) do not give up their positions. It is here that the largest sums rotate and the fiercest battles are fought, and the whole world is watching the players’ transitions from club to club without exaggeration. Bettors, who are happy to bet on both key matches and derbies, as well as on minor games, do not stand aside either. A special 1xBit Big 5 promotional offer was developed for them, which we will tell you about today.

1xBit Big 5: how to win one of three cash prizes

1xBit Big 5 started on February 2 and will last until May 23, 2022, when the next football season will come to an end in Europe. And although the champions of some leagues have already been determined (for example, it is unlikely that Marseille will be able to catch up and even more so bypass the stellar PSG in the dispute for the main trophy of Ligue 1), in other championships the most interesting is just beginning. In Italy, Inter and Napoli are coming on the heels of Milan, for which the ageless Ibrahimovic stands. A fierce battle is expected between Manchester City and Liverpool in England, who will simultaneously try to take the Champions League.

Is it possible to get additional benefits from betting on the remaining matches of the five major European leagues? We responsibly declare: it is possible if you join 1xBit Big 5! There are still free seats, so if you hurry up, you will be able to take part in the drawing of a large prize fund of 5 BTC.

Attention: if you do not have your account, we recommend starting with its registration by using the 1xbit promo code ISPORT, with which you can get a solid starting reward in the amount of up to 7 BTC.

In exchange for completed and calculated sports stakes, 1xBit Big 5 participants receive tickets. The extremely small sum that can be wagered is 0.2 mBTC (that’s how much one ticket costs). The maximum bets are not mentioned in the rules. However, the more you deposit when making a coupon, the more tickets you will be credited: so, in particular, if a bet of 0.5 mBTC is equal to three tickets, then you will receive a whole thousand for the 100 mBTC bet.

Attention: the minimum allowable odd is 1.50.

In total, there are three draws in 1xBit Big 5:

* participants who won prizes from the 11th to the 15th in the first two draws will be awarded free tickets in the amount of 1 to 5 mBTC.

The winners will be determined randomly. Simply put, the more tickets you have managed to purchase, the higher your chances of getting into one of the prize lists (by the way, winning any of the draws does not exclude the possibility of participating in subsequent ones, including the final one).

Prize funds are credited strictly within three days from the moment of completion of a particular draw, so you do not need to contact the support additionally. And one more good news: the rules do not provide for the wagering of the received win, so the lucky ones will be able to dispose of it at their discretion without any conditions.

1xBit Big 5: FAQ
How much can you win in 1xBit Big 5?
The total prize fund of the tournament is 5 BTC. The maximum monthly prize is 15 mBTC, the prize for the winners of the sweepstakes that will take place at the end of each of the five championships is 50 mBTC, the leader of the final draw will receive another 500.
How many tickets can you purchase to participate in 1xBit Big 5?
The number of tickets is not limited by the rules of the promotion.
What is the minimum bet in 1xBit Big 5?
The minimum bet, in this case, is 0.2 mBTC.
Share:
Author: Mira Sania Position: Betting Expert
Other articles by this author: - Mostbet free spins - Melbet Daily Tournament - Casino Booi registration All articles by this author