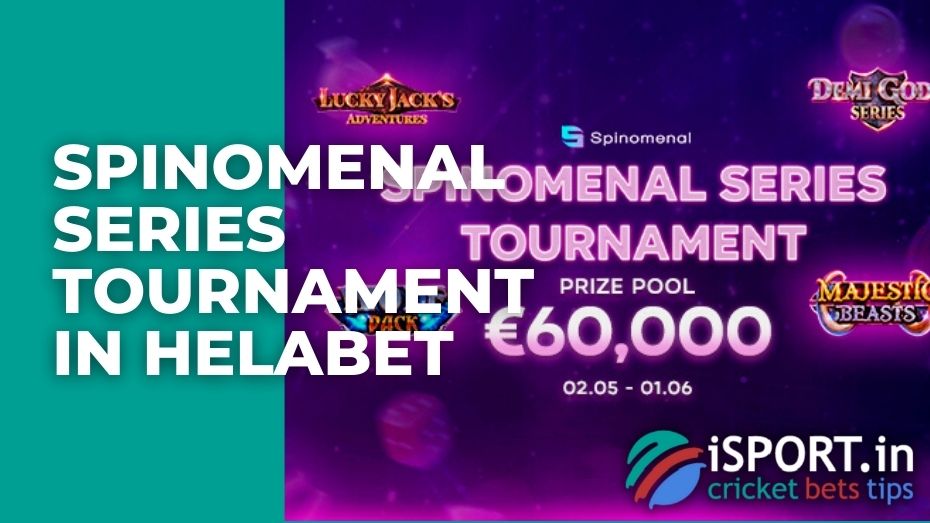 An action called Spinomenal series tournament in Helabet will be held on the website of a popular bookmaker until June 1 of this year. The promotion consists of 4 stages. Each stage lasts about a week. The prize fund of the bonus offer is 60,000 EUR. The main rule of the tournament is to earn as many points as possible. Find out how to do this in the article.

Spinomenal series tournament in Helabet: the offer of a well-known provider

Spinomenal provider’s games are available on almost every popular gambling platform. Currently, the provider has more than 100 unique games with excellent graphics and interesting features. Spinomenal software works both on a personal computer and on a mobile phone.

You can play online slots and other board games of the developer on the official Helabet website. This is an international BM that deals with sports betting, slot machines, TV games and many others. The site is open to all adult fans of gambling content. It’s easy to register on the site. This can be done in one of 4 ways:

By the way, you can create an account using a special Helabet Promo Code – isport. If you enter these symbols in the registration window, the bettor can receive up to 8,000 INR for sports betting and up to 130,000 INR for games from the casino section for creating a new account. Read the details of the initial bonus in a separate article.

In order for users to learn even more about the Spinomenal provider’s gaming software, the company regularly organizes various tournaments. So, for example, the Spinomenal series tournament in Helabet event takes place on the bookmaker’s website from May 2 to June 1, 2022. All BM clients will be able to become a participant and compete for a part of the prize fund of 60,000 EUR. Now we will figure out in detail how to do this.

The promotion takes place in the form of a tournament, which consists of 4 stages. Each stage lasts one week. The entire prize pool will be divided between 4 periods. This is how the whole table of winners in the Spinomenal series tournament in Helabet promo looks like:

Of course, those participants who score the most points receive additional money. Punters must buy spins for real money in promotional games to earn points. The set of points is different (like games) at each stage:

The minimum stake in all slots is 0.2 EUR (or the equivalent in the player’s currency). All prizes are credited to the winners’ balance within 3 days. There is no need to wager gifts! Do not forget that you can bet only for real money. Otherwise, points will not be counted. According to the general requirements of the Spinomenal series tournament in Helabet event, the organizers have the right to change or suspend the draw at any time. Therefore, keep an eye on all changes on the main page with the bonus offer. Good luck!