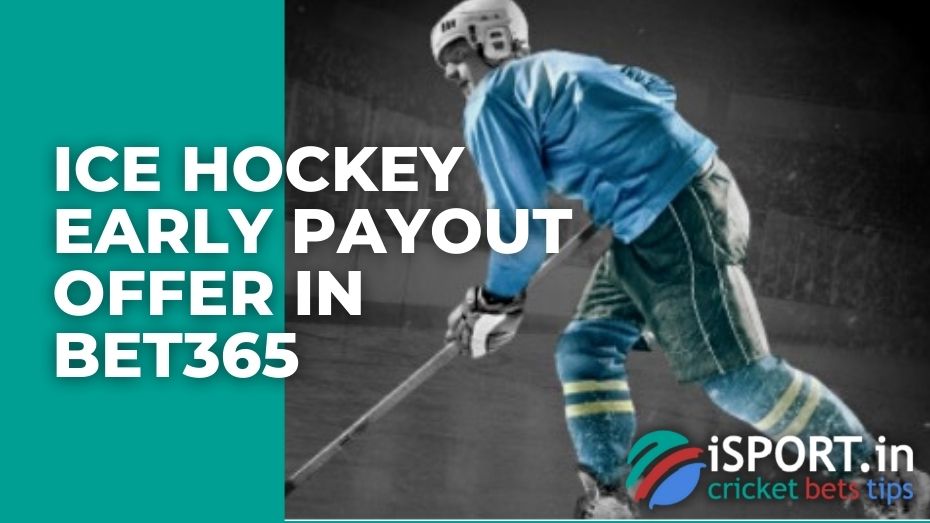 Now hockey betting lovers on the Bet365 site got a exclusive opportunity to calculate winning bets ahead of time thanks to the launch of a fresh Ice Hockey Early Payout Offer promotion. A large difference in the account may cause the coupon to be calculated and another bet to be made before the final siren. We tell you how the new bonus works.

Ice Hockey Early Payout Offer: how to get it

The international betting platform Bet365 regularly pleases new and existing customers with the most tempting offers. These include the Ice Hockey Early Payout Offer, according to which players have a chance to pay the coupon early if some conditions are met.

The main rule of this promotion is the presence of benefits of one of the teams for 3 goals during the match. Everything is very simple: the bettor gets the opportunity to collect his winnings before the end of the match, if the team on which the bet was made leads the score. At the same time, it does not matter how this confrontation ends. However, the bookmaker emphasizes that the stake must be concluded before the start because otherwise, the promotion is not valid.

Participation in the promo is available to current and new Bet365 customers, so you should take care of having an account today:

It is not superfluous to be reminded of the possibility of receiving up to 30 USD when registering via the Bet365 promo link. A couple of clicks – and the bonus is already on the player’s account.

At the same time, the coupon must meet some criteria, without which Ice Hockey Early Payout Offer does not work:

The Ice Hockey Early Payout Offer conditions are considered fulfilled if the team gets an advantage of 3 or more pucks at any particular moment of the match. At this moment, the coupon will be calculated by an early victory. The winnings will be credited to the balance no later than 15 minutes after the account is fixed.

However, the victory will not be taken into account if it falls under the following principles:

Important: the promotion does not apply to pre-season matches and All-stars matches.

Do not underestimate the advantages of the Ice Hockey Early Payout Offer, which guarantees early winnings. It allows you to use the funds received before the end of the proposed game. Thus, the participant can multiply his capital many times.

In addition, it is impossible to exclude the fact that the promo does not depend on the result of the game. This can be traced to the example of the regular NHL match “New York Rangers” – “Washington Capitals”.

Capitals led 4-1 by the end of the second period, but could not hold the advantage, moving the game into overtime and losing in 5 minutes. However, the Ice Hockey Early Payout Offer participants should not worry about this, because their bet on winning Capitals should already be calculated by winning.

The promo applies to both single pre-match bets and accumulator stakes. In any case, we note that the event works – check it yourself!