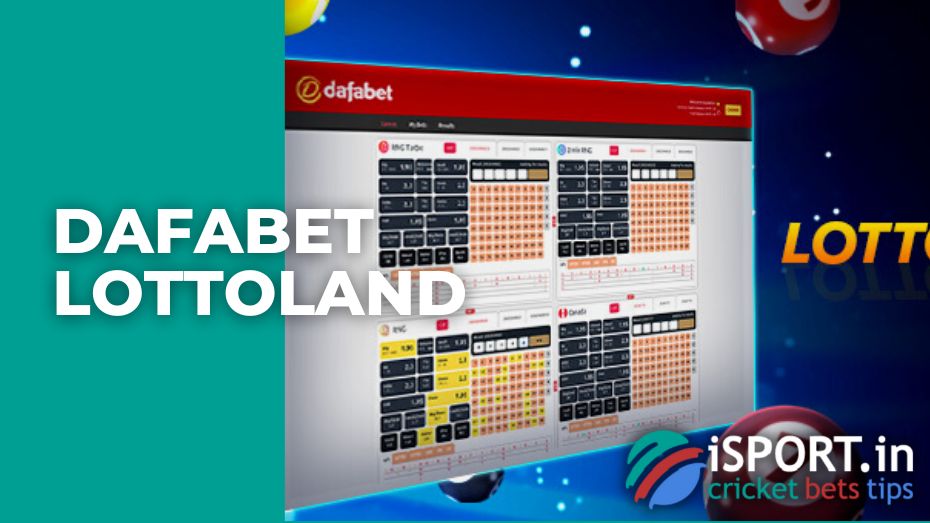 In order to join the lottery, it is optional to purchase a paper ticket and look forward to the broadcast. So, Dafabet offers a choice of four lottery options with a minimum set of conditions, and the amount of winnings can exceed the wildest expectations! How it works – we tell you on the example of Dafabet Lottoland.

Dafabet Lottoland is available to all registered online casino customers without exception. To join the next drawing, it is enough to open the company’s website, click the “Join now” button in the upper menu bar and fill out the registration form, then activate a special bonus code (this step is not strictly mandatory, but thanks to it you will be able to receive a starting promotion in the amount of up to 30 thousand INR).

The second step is to top up the account with the desired amount. By itself, it is completely uncomplicated, but do not forget to make sure that:

Attention: representatives of all countries of the world, without exception, can take part in the lottery.

What is hidden behind the name Dafabet Lottoland?

Twenty numbered balls, randomly selected from eighty, take part in each individual draw. The resulting combination of 20 numbers, in turn, is divided in such a way as to form several options for different types of bets, for each of which a separate payline is provided.

Of course, the main question that worries potential Dafabet Lottoland participants is how much can you win?

Let’s analyze some illustrative examples following the available betting options. For the convenience of calculations, let’s imagine that the player has bet 100 USD.

If the sum of twenty extracted balls is equal to 810, all stakes placed are reset. In all other cases, the standard 1.95 wager is used: so, for example, if the sum of the dropped balls was 711, then the “Small” option wins, which means that the player who bet on it gets:

In this case, only the last digit of the sum of the dropped balls matters. So, for example, if you bet on “Odd” and the sum of twenty balls was 319, then you will be credited:

A draw is not provided for the specified bet option. If the total amount ends with zero, then it will be counted as “Even”.

If you gamble on this option, the final calculation will not consider the sum of the balls but the balance of even and odd digits. So, if you bet on “Evens” and seven of the twenty balls that fell out turned out to be odd, your ticket is recognized as winning. The odd for this option are distributed according to the principle of 2.3 for even / odd and 4.3 for a draw. Accordingly, the winning amount will be:

Each of the ranges has its name, range of values and odd, namely:

When determining the result, the total amount of balls dropped is considered. So, for example, if you bet on a “Wood” and the final figure was 711, then you will be credited:

Here the bettor is asked to choose from one to five numbers from 1 to 80. After dropping twenty balls, the system automatically calculates the number of hits and determines the winning coefficient.:

So, for example, if you chose three digits, and the total number of hits was 2, then the winnings will be calculated according to the formula:

The winning coefficient here is one – 3.7. The final calculation of the winnings takes into account the threshold value “810” and the last digit of the total amount of dropped balls. Accordingly, there are four possible options:

So, let’s say if you chose “Small/odd”, and the total amount of dropped balls was 551, then you will be credited:

And one more important clarification. When choosing your Keno option, specify the time of the draw (a specific time zone gives the data). If the results are very late or, on the contrary, are published earlier than expected due to a technical error, the organizers reserve the right to cancel the draw.