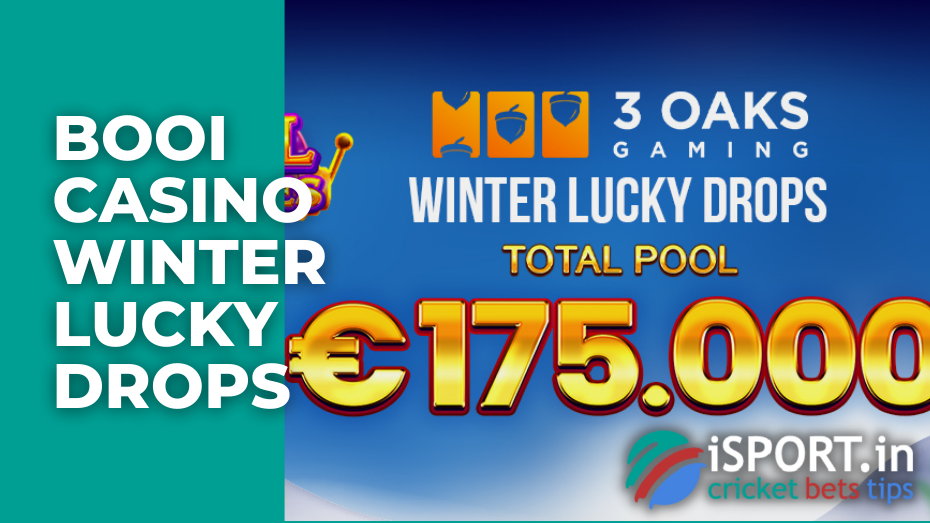 The New Year holidays are getting closer, so the bonus lines of popular online casinos continue to be replenished with new positions. However, only some are ready to participate in festive contests because fulfilling the proposed conditions often requires effort and time, which is not enough on New Year’s Eve. Fortunately, there are exceptions – for example, you can win good money without straining in the new Booi casino Winter Lucky Drops tournament!

Even though the Booi casino Winter Lucky Drops nominally belongs to the number of slot tournaments, it also has all the features of a festive draw, where any participant has a chance to win, regardless of how many bets they managed to make.

Let’s start with the main thing – filing an application. You can arrange it in a couple of clicks:

The event is held jointly with the young provider 3 Oaks Gaming, which broke into the gambling services market quite recently, but has already managed to attract the attention of users around the world due to the following factors:

In addition to the above, slots from 3 Oaks Gaming are characterized by a wide range of plots, and if you wish, you can choose both ageless classics (“Diamond explosions 7s”, “Three Coins”, “Magic Apple”) and stop at one of the “fabulous” slot machines (“Moon Sisters”, “Caishen Wealth”, “15 dragon pearls”). In this case, the organizers have not provided any restrictions, so you have every right to place a bet on each of the proposed slots or limit yourself to one or two categories.

The Booi casino Winter Lucky Drops has a prize fund of 175 thousand euros, which will be played in several stages:

5 thousand euros are distributed among the participants every day. The number of bets made during the day does not matter – the Lucky Drops mechanism is used to determine the winners, which awards prizes in random order. The maximum amount of winnings per day is 300 euros, the maximum number of prizes that a single player can claim is three.

And finally – a few more important points. All the money received within the framework of the Booi casino Winter Lucky Drops goes directly to the main accounts of the winners, which means that they do not need to be wagered. You can withdraw them immediately or, on the contrary, save them for further bets or participation in subsequent tournaments. However, be careful: Bui online casino follows the policy of AML and KYC, preventing any attempts of fraudulent actions on the part of players. These include, in particular, the creation of an additional account in order to increase the chances of winning, which falls under the definition of “multiaccounting”. Follow the principles of fair play, and luck will not take long to wait!