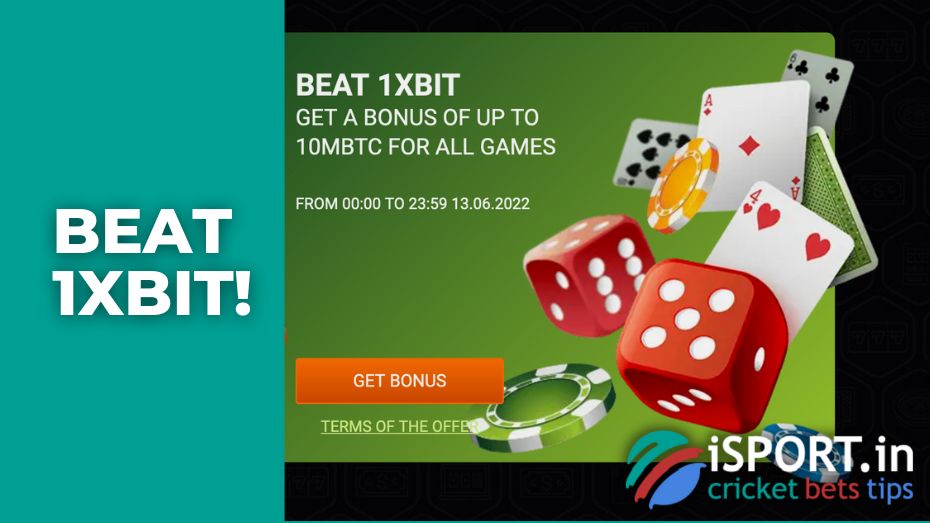 Are you tired of the routine and ready to take on a new challenge? Do you believe in your luck? Then try your luck in Beat 1xBit! – a special program from the casino section for the most devoted fans of gambling!

Beat 1xBit! can truly be called a real diamond of the bonus line. And you may wonder why. On the one hand, this promotion is among the permanent ones, which means that if you are unlucky today, then in a week you will be able to try your luck again. Secondly, the conditions are so simple and clear that even a beginner who has not yet had time to get used to the Casino section will not get confused.

Beat 1xBit! is activated every Monday and valid from midnight to midnight. Thus, you can join the event for 24 hours, but we recommend planning your time in advance to ensure that you complete the five proposed steps, namely:

Attention: if you don’t have your own account yet, then our advice is to start not with Beat 1xBit!, but with a welcome bonus of up to 7 BTC, which can be received using the promo code ISPORT.

A link to the “Games” section can be found in the upper menu bar. There is not only a huge library of slots for every taste, but also card games, ladder games, lotteries, dice and many others.  Be careful: despite the large selection, some games are excluded from the promotional list (for example, “Monkeys”, “African Roulette”, “Crown and Anchor”, “Lucky Wheel”, PF Pokerlight, PF Dice and a number of others).

You are completely free to choose both the game itself and determine the amount of bets. There is no single recipe for success here – much depends on the personal preferences of the participant, as well as the strategy chosen. So, for example, some feel more confident at the virtual card table, while others tend to trust the random that determines the outcomes of the spins. If you consider yourself in the second category, then when choosing a virtual slot, you can always use the following options:

Attention: the maximum amount of the reward in Beat 1xBit! is 10 mBTC, which is important to take into account when planning the deposit amount (so, if you top up your account with 7 mBTC, you will receive the same amount to the bonus account, but if the Monday deposit is 15 mBTC, then you will be credited with 10 mBTC, that is, the maximum specified by the rules).

At the same time, it is impossible not to mention several key limitations of Beat 1xBit!, which the organizers warn about:

Good luck in the game!

Beat 1xBit!: FAQ
When can I join Beat 1xBit!?
The promotion is held every Monday from 00:00 to 23:59.
How much is the minimum deposit in Beat 1xBit!?
The minimum deposit defined by the rules is 1 mBTC, while the maximum amount of the rewatd is 10 mBTC.
Is it possible to participate in Beat 1xBit! without registration?
No, only registered clients of the company are allowed to participate in the promotion.
Share:
Author: Mira Sania Position: Betting Expert
Other articles by this author: - Tuesday blackjack cashback Indibet - Sea Adventures Tournament in Casino X - Winter Winning with Melbet All articles by this author